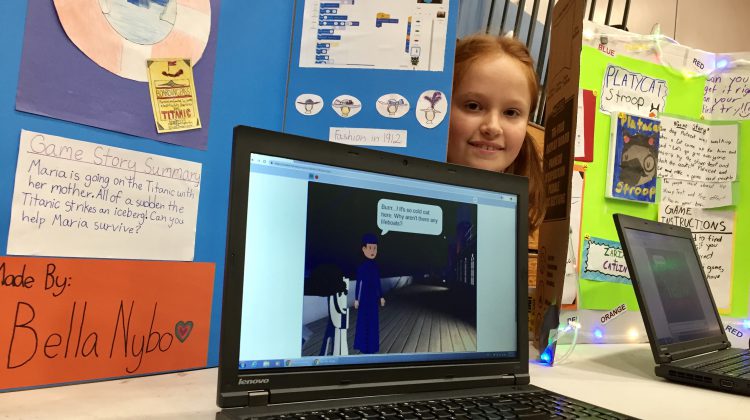 The gym at Lake Trail Middle School was packed on Friday, as young coders showed their skills during the Code Quest Arcade event.

More than 80 different projects designed by district students were on display, including an innovative game creation by a young Grade 2/3 class from Aspen Park.

The Grade 2/3 students learned how to code,  before teaming up with Grade 6/7 students who helped with additional coding as well as backboards.

Dawson gave an overview of the event.

“It was put on by the school district and The Learning Partnership. What the students have done is they’ve learned how to do computer coding – they’re using a program called Scratch.”

The students used their coding skills to teach others what they’ve learned.

Many of the games had an environmental theme.

“And then they’ve created a game that a player can play and learn about how to protect the environment,” Dawson said.

One game, created by Brooklyn Elementary Grade 6 student Bella Nybo sent players on a voyage on the Titanic, and had to use the information they learned about the vessel to save themselves after it smashed into an iceberg.

Nybo said “my brain works well with coding, so it wasn’t super hard,” but it took some time to work out a few bugs in her game.

Lowe said it was exciting to see the students share their work.

“They’ve been learning Scratch and building their games for a few months, so this was sort of a big launch and celebration for them,” Lowe said.

She added, “Some of them (the games) are completely build just on the pong premise, but they’ve put their idea and their spin and their learning into it.”

Five Grade 6/7 classes from Lake Trail Middle School, along with Code Clubs from different schools around the district were at the event.