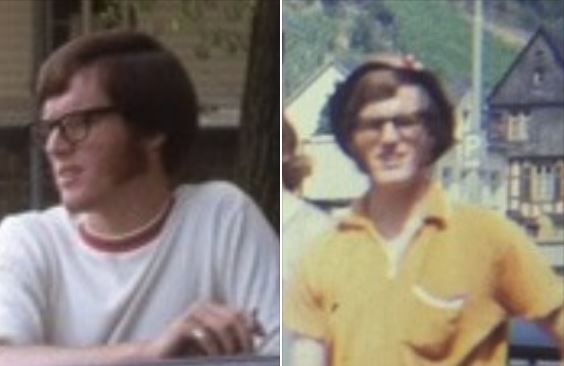 Dave and Doug Bradley met in 1969 while travelling in Germany. Dave now lives in North Delta. (supplied by Doug Bradley)

VANCOUVER ISLAND, BC – Doug Bradley was looking for a man named Dave.

And now, he’s found him. Bradley said Dave now lives in North Delta with his family .

Bradley and his sister first met Dave – as well as five other American travellers – in 1969. He said they all met in Germany, after which they all stayed at the Bonn Youth Hostel.

He had just turned 18 and recently graduated from high school. He said the two months and a half months he spent travelling around Europe was magical, and the best time was the week he got to spend with the other travellers, including Dave.

He said they all watched the moon landing together at the US Embassy.

Bradley was able to locate some of the American travellers easily, but it took him a little longer to find Dave as he said he didn’t have a last name for him.

But he admitted he didn’t remember a lot about Dave.

“I don’t remember much about him in particular, just that he was part of the group and that we had a great time travelling together for a week,” Bradley said.

“When Dave first found out that I was looking for him, he said ‘well gee, I can’t really remember much about Doug Bradley.’”

He said he wanted to find Dave and the other travellers to have a reunion.

Bradley said that once he finally found Dave and got in touch, it felt like it was only yesterday that they met.

“I always knew it was rather magical. No trip will ever stack up to those two and half months, and that week (with Dave and the others) was the greatest week of my entire life. It was just a group of people that became friends very quickly and travelled together and had a ball doing zany things.”

He said the only reason they were separated was because Dave and the others had a car.

“To me, it was the greatest week of my life and I always wondered: gee, to them, was that just another week or was that special for them?”

Bradley said he found out that week was special to the others as well.

They don’t quite have a date yet, but Bradley said they hope to have a reunion in California.