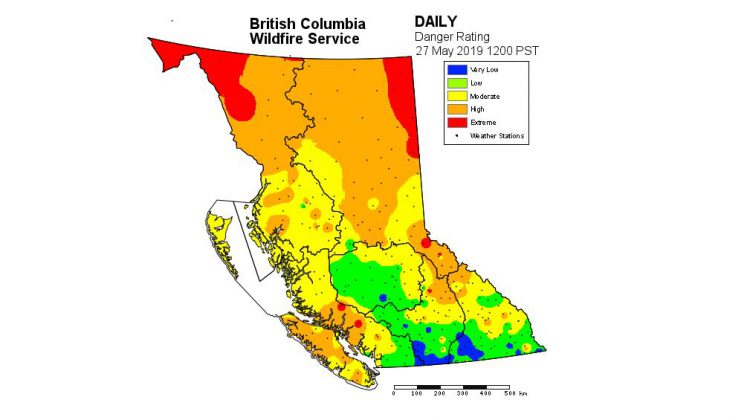 Starting this Thursday at noon, the Category 2 open fire prohibition will be enforced in the region, which covers south coastal B.C., the most heavily populated area in the province.

This area encompasses approximately 16.5 million hectares of land, and includes the Sunshine Coast, and Vancouver Island.

Information officer Marg Drysdale spoke about the types of fires affected by the ban.

“Those are largely backyard or debris fires, any kind of burn barrels… those will be prohibited as of noon on Thursday,” she said.

Leading up to the ban, Drysdale reminds residents to be extra careful around open fires, especially with a heat wave in place this week.

“If you do have anything that you are burning in your yards or you’re having a burn barrel, please make sure you monitor it at all times, make sure that it’s fully extinguished. And remember to take local conditions into account. It is extremely dry out there.”

So dry, in fact, that the fire danger rating in the Coastal Fire Centre has jumped from moderate to high throughout much of the region.

“We are going to get extremely dry conditions throughout the week,” Drysdale said.

“We may have the occasional shower in some areas but for the most part it’s going to be fairly dry right across the Coastal Fire Centre.”

Every part of the region will be affected by the prohibition.

As far as a campfire ban, it depends on the rules in each jurisdiction in the Coastal Fire Centre.

“A campfire is legally a half a metre by a half a metre,” Drysdale said. “So you are allowed to have a campfire. They are relatively small, but the same conditions apply where you do have to monitor them at all times. They have to be fully extingished anytime you leave the area and we do remind people that you are responsible for anything you do light.”

However, Drysdale said people have to be mindful of the dry conditions.

“Right now, we’re hot, dry, we didn’t take a lot of rain, particularly on the island, so those conditions are what’s triggering this prohibition,” Drysdale said.

There have been 31 fires in the Coastal Fire Centre, all of which have been human-caused.
A variety of things can spark a human-caused wildfire, ranging from equipment malfunctions to cigarettes, to campfires.

Basically, any wildfire that is not caused by lightning is considered to be human-caused.
The last two wildfire seasons have been the worst in B.C. history.