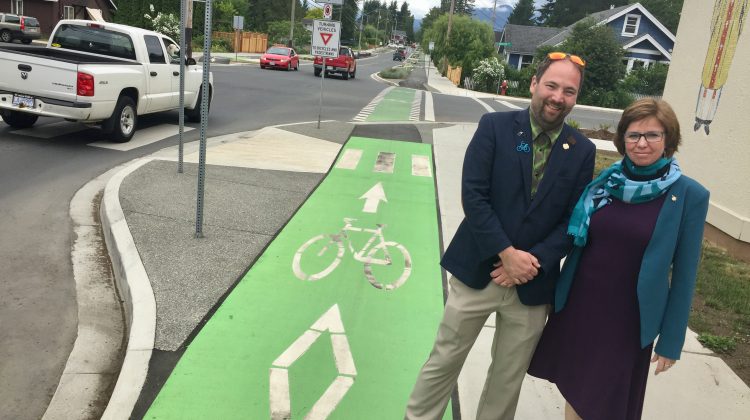 Courtenay Mayor Bob Wells celebrated the completion along with Nanaimo MLA Sheila Malcolmson and other guests this afternoon.

The project was made possible by a $3.25 million federal grant and $41,000 from the ICBC Road Safety program.

The upgrades on 5th Street between Menzies and Fitzgerald Avenues included:

According to the city, the project “provided an opportunity to replace aging underground infrastructure and introduce innovative management practices to more effectively manage rainwater.”

Courtenay Mayor Bob Wells noted that these are Courtenay’s first separated bike paths that will provide that extra layer of protection for cyclists.

He added that the project will prove to be a useful test model moving forward.

“This project isn’t just about providing a safer way for multi-mode of transportation,” he added.

The federal funding came from the Gas Tax Strategic Priorities Fund, which supports infrastructure to support sharing the roadway for people who drive, walk, and cycle.

Wells said the project was about safety for pedestrians and cyclists on one of the city’s busiest streets.

“It’s just an extra level of safety,” he added. “And where the crosswalks are, they actually make for shorter crossings, which again makes it a safer conduit to get around the city.”