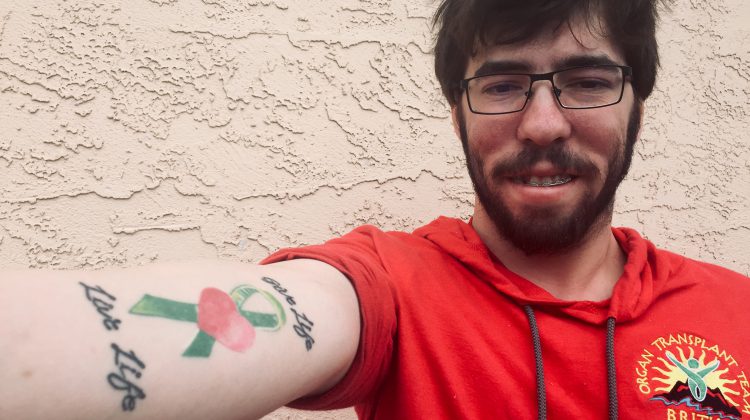 The Comox Valley resident is thankful for the heart that beats inside his chest – a heart that he wasn’t born with.

Thompson has, in fact, had three hearts in his 21 years. He was born with idiopathic dilated cardiomyopathy, a defect that causes the left side of the heart to be too large to close properly, making it unable to properly pump blood.

Because of this, he has undergone two transplants; the first when he was 18 months old, the second when he was five.

Thompson’s body rejected the first heart when he was four, resulting in a second transplant a year later.

Both donors were about the same age that Thompson was at the time.

“Both times (the donors) had to be similar ages, but with my first transplant, a lot of other children my age who needed transplants got their organ the same time I did, so there was this immense feeling that went around that one child had died and because their parents had chosen to allow organ donation, they managed to save a lot of other children’s lives, including my own,” Thompson told MyComoxValleyNow.

The life-saving transplants have given Thompson a life, and the opportunity to compete at several Canadian Transplant Games. Thompson has won so many medals at the national games, that he admits he’s “lost count.”

“I’ve been able to do all these things, go to university, go out and have friends and have a life,” Thompson said.

Thompson urges everyone to become an organ donor and save lives in the process.

“One of the biggest misconceptions… is that they are too old or they are too sick, or they are too this or too that. But the reality of organ donation is that it doesn’t matter how old or even in some cases how sick you are because there is always the potential for donation,” he said.

Looking to compete on world stage

This summer marks the 20th anniversary of his first life-saving heart transplant.

To honour the selfless gift of his donor and donor family, and all the people that have helped him in this journey, Thompson will be participating in the World Transplant Games in Newcastle Upon Tyne in the U.K.

“It’s kind of a nice way to go out and celebrate and reunite with a lot of team members because it’s quite a large event,” Thompson said. “There are many, many people there from Team Canada. It’s always nice to see them and recollect and chat together and reminisce.”

If he’s able to attend, this will be Thompson’s second appearance at the world games. His first world experience was back in 2009 in Australia.

This year’s games take place from August 17th-24th and Thompson will once again be swimming and cycling.

Thompson has modest expectations if he’s able to go to the U.K.

“If I win something, great, if I don’t, you know, I’m not too down about it. It’s a good experience for a good cause.”

A GoFundMe page called “Send Robbie to The World Transplant Games” has been created to help pay for expenses including flights and accommodations.

“Anything helps,” Thompson said. “When I had both my transplants, the Comox Valley was so amazing to my family. We had all sorts of charities and individuals just rally around to make sure that my parents could keep their jobs, we could keep our home, we could keep our livelihoods. It’s always wonderful to be able to do that kind of representation (at the worlds). I don’t know if I can give back to this community enough.”