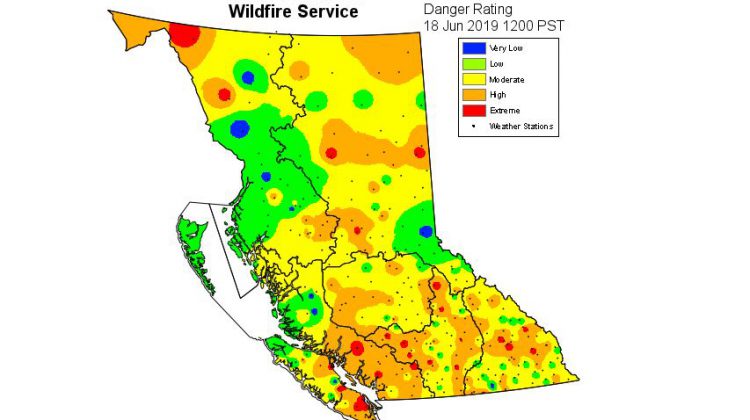 VANCOUVER ISLAND, B.C. – A campfire ban could be coming to the Coastal Fire Centre.

Information officer Dorthe Jakobsen said the centre is looking at a possible campfire and Category 3 fire ban in the next week or so.

Jakobsen said conditions will dictate if a campfire ban is enforced in the region, which includes all of Vancouver Island and the Sunshine Coast.

“They’re looking at build-up indices, they’re looking at fine fuel and moisture codes, which is all about the fuel on the floor of the forest and how dry it is, and when certain thresholds are reached in those indices, we put in a campfire ban,” she said.

As well, hot and dry weather have hiked the fire danger rating to high through a good chunk of the region, including the mainland coast, southern Vancouver Island, and Campbell River.

Small sections of the east coast of the island south of the Comox Valley are at an extreme fire danger rating.

Looking ahead, cooler weather and some possible sprinklings could help ease the fire danger in the region.

“We’ll see how the indices look after that,” Jakobsen said.

Even with the dry weather, just one fire has popped up in the Coastal Fire Centre. The Taylor Flats Fire west of Port Alberni is at 1.8 hectares and is being held.

The number of fires in the region is on par with last year.

To date this year, there have been 45 fires in the region, and 43 have been human-caused.

B.C. is coming off its worst wildfire season in history. After a relatively calm July, a lightning storm on Aug. 11th sparked roughly 60 fires overnight in the Coastal area.