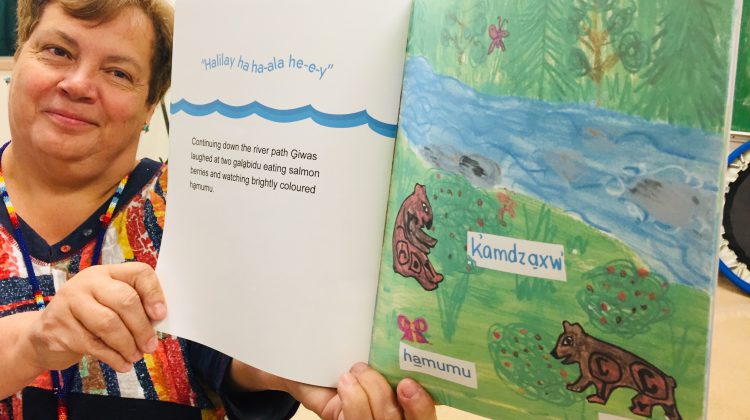 COURTENAY, B.C. – The legacy of a Métis environmentalist lives on through a colourful picture book.

Titled Little Giwas, the book is the brainchild of Colleen Devlin, who teaches the district’s Indigenous Education kindergarten/Grade 1 program.

It is dedicated to the memory of Micah John Messent, a former Puntledge student who was among the 157 victims of the Ethiopian Airlines crash in March.

Messent, a Métis man, was a strong advocate for the natural beauty of the Comox Valley where he was raised.

The book took shape through the efforts of 19 young Indigenous students from Ecole Puntledge Park Elementary.

Together, the kindergarten and Grade 1 students transformed the First Nation’s words of a song written and gifted to Comox Valley Schools into Little Giwas.

The impetus to Devlin’s studies was the United Nations Declaration made in January that 2019 be the Year of Indigenous Languages.

The song celebrates the Kwakʼwala culture and speaks of the unique landscape of mountains, ocean, rivers, as well as the natural wildlife that inhabits the valley.

Devlin spoke about how she came up with the concept for the book.

“The song is just so beautiful and it spoke about the Comox Valley, and enjoying the powerful lands, rivers, and ocean that we have around here,” Devlin told the MyComoxValleyNow.com newsroom.

“So I just started about the animals that my kids love, and words that they are learning in the Kwakʼwala language and we just started (with) this little deer, starting at the glacier and going all the way down to the ocean,” she said.

Devlin said the class performed the song in front of the entire district in February and they decided to create a dance to go with it.

“And so the kids picked their favourite animals that they wanted to put into the dance, and then they said, ‘Let’s put the animals into a song,’” she said. “So they got to choose the animals and the locations. And of course, we had to include the tree of life, the cedar tree, the forest, the streams…”

The Grade 1 students wrote the book and the kindergarteners did the illustrations.

Devlin is proud of the students.

“I was really amazed that such little kids could create such beautiful art,” she said. “Some of it was the crayons they used. They just did their design and put a wet cotton ball on top so the colours all bled together, so you don’t see a lot of white backgrounds. And they were tenacious, they just kept at it. They had a vision, they shared the vision with each other and they worked really hard as a team to create the whole project. It was very exciting.”

The book helped the students connect to their heritage, Devlin said because they are on K’ómoks First Nation territory, she and the students chose Kwakʼwala to represent the language that they wanted to use.

“The kids were so thrilled to be trying some fancy new words, and because it’s the International Year of Indigenous Languages through the UN, it was really important to showcase language for other schools around the district as well.”

One-hundred copies of the book is going to be distributed around the district in September, along with stuffies so the early primary classes can learn the song and read the book and dabble in some language to learn.

The language, Devlin said, is the most important part.

“It’s important to honour the place where we live on, and I think the best way to do that as we’re learning culture, and history and art, is to do that through language.”