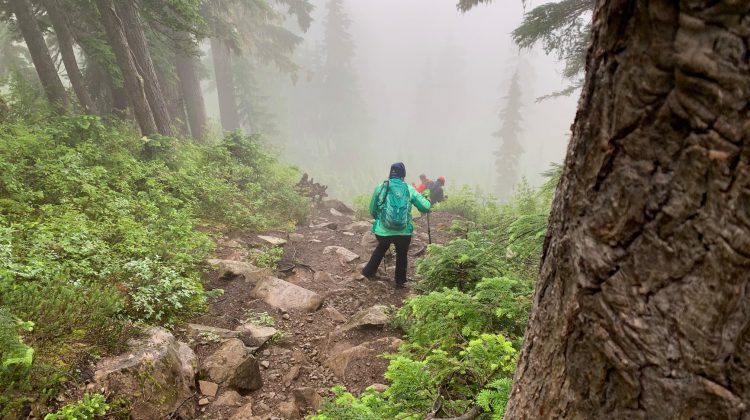 Photo of the rescue team, and the two american hikers. (Supplied by Comox Valley Ground Search and Rescue)

Two American hikers were rescued this morning after getting disoriented near Mount Albert Edward.

The foggy weather caused them to miss the junction.

A team hiked in and located the hikers by 4:30am, set up camp, warmed them up, and after a few hours of sleep, hiked them out in first light.

He says the rescue was more difficult for team members because of the weather conditions.

“Difficult condition for the team going in, the visibility was very very poor. We provided the team GPS with a preset track that basically they followed into the subject.”

Berry adds that the hikers were relatively prepared, but they were missing some key things you should have when you plan a hike.

“They did have cell phones with an extra charger…they did have some basic equipment, some headlamps… but certainly weren’t prepared to be in the alpine overnight in wet conditions.”

“The biggest challenge was in terms of navigation equipment, they didn’t have what you should have to be able to find and keep yourself on track,” said Berry.
He says its good to see the two return safely but adds if you plan to go for a hike you should always plan ahead.

“Whenever you are heading out you need to go expecting that you could be delayed and take what you need with you to keep you safe throughout a 24 hour period and to have some means of communicating should something go wrong.”