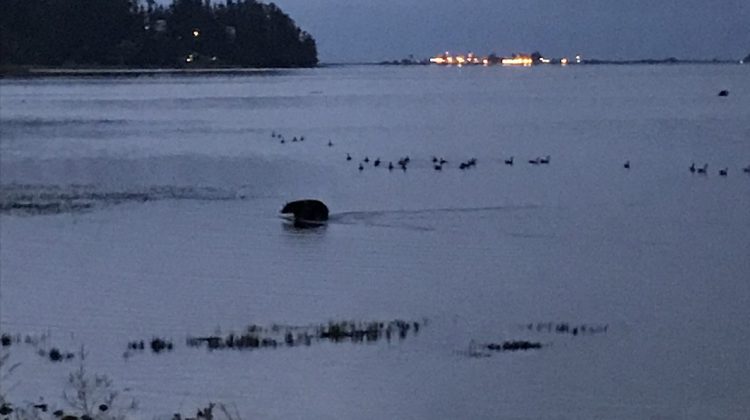 A black bear was seen near the Courtenay Airpark and Estuary Saturday night.

Shawn Heighington says he was walking through the park when he noticed the bear in the mudflats.

“We were just looking out towards the water and we saw the bears head which we originally thought was a seal and then he just kinda swap up out of the water,” said Heighington.

“He started walking up on the mudflats towards the airpark, across the Estuary and came right up towards us as we were walking.”

Heighington says they only stuck around for a short period of time before leaving the area and letting others know the bear was out and about.

“We watched him for as long as it was reasonable and safe and then walked out of the airpark towards the Whistlestop.”

“On our way out we saw some people walking in and told them you might want to divert the other way for now,” Heighington added.

BC Conservation Officer Gordon Gudbranson says when you’re out hiking or walking, you should always be bear aware.

“What you want to do is make lots of noise when you’re out walking, especially along rivers and trails. If you do see a bear you want to make yourself be known, talk to them and slowly back away.”

He also added that a black bear was struck by a vehicle in Royston yesterday.

Officers didn’t locate the bear, and they are asking the public to keep a lookout for it near Hilton Road and Haas Road.