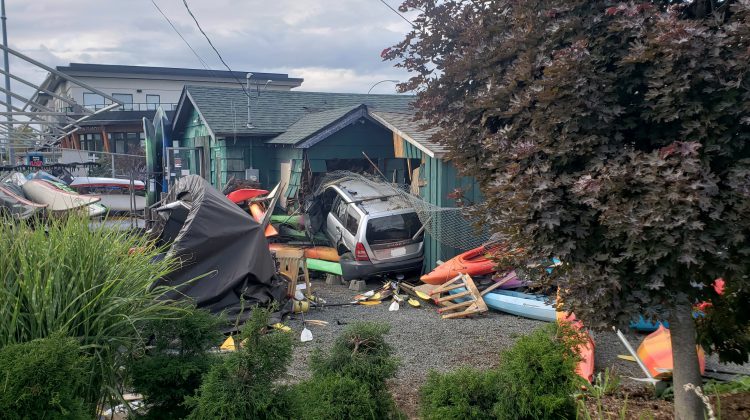 Photo of the Subaru in the backside of Comox Valley Kayaks & Canoes (Jon Gauthier, MyComoxValleyNow.com staff)

Comox Valley Kayaks & Canoes is back in business.

The store is now open again after a car plowed into the side of the building late Sunday afternoon.

A Subaru veered off of Cliffe Avenue before crashing into the store next to the 5th Street Bridge.

Store manager Kerry Webb says luckily, the staff was at the right place at the right time when the accident happened.

“We had staff inside the shop and luckily there was nobody downstairs where the incident took place,” she said. “They just looked over but before they could even hear anything and know what was happening they just saw paddles and shelvings flying across the room.”

Webb said the initial thought was that it was an earthquake.

Once outside, staff members helped the woman who had driven her vehicle into the shop.

This isn’t the first time this has happened. The store seems to be a magnet for wayward vehicles.

Webb figures this is the sixth or seventh time a vehicle has either crashed into the store or its fence.

“It’s I’m sure the worst one that has happened, damage-wise, but again, no injuries,” she said.

Despite the damage, Webb says the staff is blessed on many levels.

“Nobody was injured in this and it has been a quick turnaround,” she said on Tuesday. “We’ve got a lot of work to do but we’re just getting the job done.”

She noted that the community, and paddlers, in particular, have been there for the staff every step of the way.

“The paddlers are amazing people and we’ve had so much support,” she said. “The staff who are here are still really quite shaken up but people have been so supportive and so many offers of help so we’re really grateful for that.”

She added, “It’s miraculous that there were no injuries and (we’re) happy to be able to open again.”

The driver was transported to the hospital.

Comox Valley RCMP spokesperson, Cst. Monika Terragni, said the cause of the crash appears to be a medical event and no charges are expected as a result.