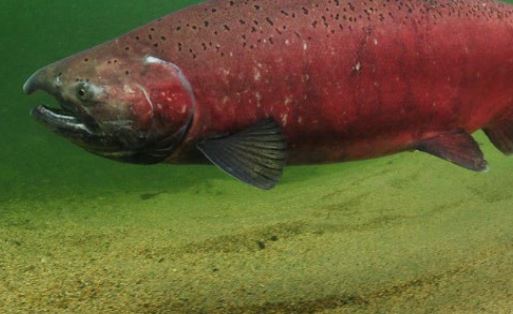 Climate change is having a drastic effect on Canada’s Pacific salmon populations and their ecosystems.

That’s a key finding from the DFO’s first ever State of Canadian Pacific Salmon report.

The planet is warming, and the last five years have been the warmest on record. Canada’s climate warming has been double the global average, and even greater at northern latitudes.

The report notes that marine heatwaves, warmer rivers and lakes, food web changes, increased floods and droughts, and other freshwater habitat changes are all affecting salmon.

The DFO’s regional director of fisheries management Andy Thompson said 2019 has been a challenging year for those who depend on salmon in B.C.

“We have seen, unfortunately, significant declines in the number of stocks, and challenges as a result in terms of managing fisheries,” Thompson said. “Those include fisheries in the north coast and south coast and Fraser areas.”

He called salmon “an iconic species that really captures the mindset of many British Columbians and Canadians.”

“And as such, we certainly have a significant amount of staff and time devoted trying to understand the state of salmon in British Columbia, and also understand how we can best manage it and mitigate the impacts that we’re seeing.”

The report found that abundances of Chinook salmon are reaching critically low levels in southern B.C.

Chinook might be particularly sensitive to changes in freshwater, given their site-specific adaptations to spawning and rearing habitats.

There are only a few exceptions to these declines in recent years, such as East Coast of Vancouver Island Chinook populations.

Many Sockeye and Coho populations are declining in southern waters.

A number of these populations are considered endangered or threatened

The DFO has implemented significant restrictions to recreational and commercial fisheries to help protect returning Chinook and sockeye stocks to the Fraser River, he noted.

Canada is not alone, Thompson said. “We’ve seen declines in coho fishing in Alaska and one of the worst years in sockeye returns in Lake Washington in Washington State, as well.”

Adding to the challenge is the Big Bar landslide that blocked a portion of the Fraser River watershed from fish passage.

The $2.7 million fund will go to five new Vancouver-based projects.

For more on the projects and the fund, click here.

The federal government says these projects “will advance work to restore and enhance salmon habitat to support British Columbia’s fish and seafood sector, and help secure the sustainability of wild Pacific salmon, as well as other wild fish stocks.

“Over the next five years, investments through the BCSRIF will help ensure British Columbia’s wild fisheries are environmentally and economically sustainable for the long-term, and that middle-class jobs in the fishery are resilient to the challenges of climate change, as well as evolving economic conditions.”

Wilkinson said the government is acting to secure the sustainability of stocks for today and years to come.

“Through the investments being made under the… fund, we are taking decisive action in improving conditions and habitat in waterways across the province,” he added.