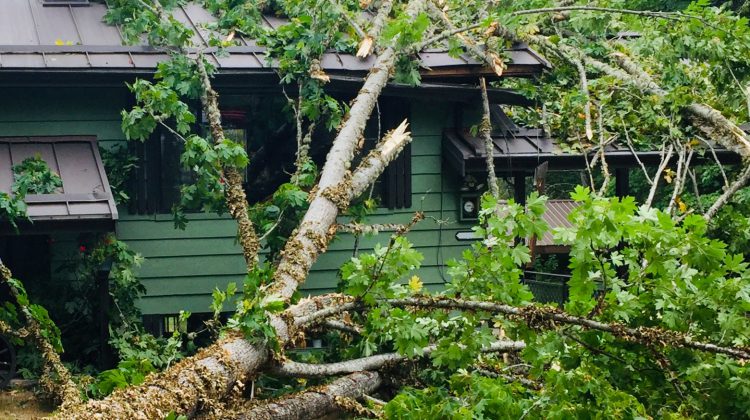 No one was injured after a tree cracked at its root and smashed into a home on Salsbury Road on Thursday night. (Troy Landreville, MyComoxValleyNow.com staff)

A Courtenay resident feels lucky to escape injury after a tree crashed onto the roof of her house.

Shelly Brown says was laying on her couch in her living room, watching TV at roughly 9:30pm last night when a large maple tree in her front yard snapped off at its root.

“It was crackling and I yelled to my daughter in the basement, ‘Get out, the tree’s coming down, and we both got out.”

The top of the tree fell into the house, shattering a couple of windows and breaking the storm drain.

Brown was emotional on Friday morning as she surveyed the damage to her home on Salisbury Road.

“It’s emotional,” she said. “When I look at it I just realize how lucky and blessed we were to get out.”

Brown has lived in the home for 31 years.

Asked if she ever thought the tree would come down, she answered, “no. God no.”

She said the support she received from friends, family, and the entire valley after the tree came down has been remarkable.