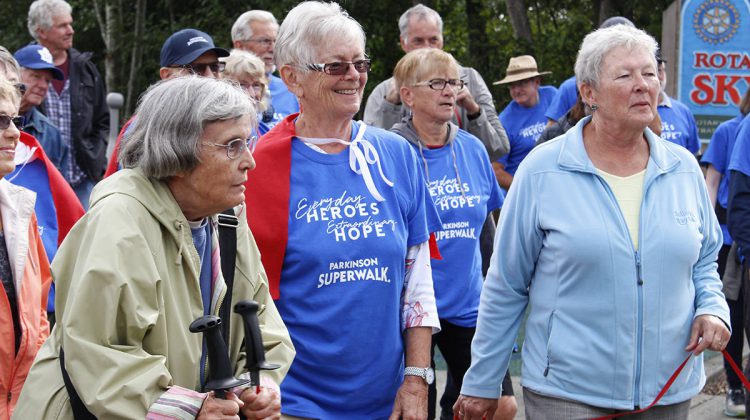 For Marg Elson, the Parkinson SuperWalk is personal.

Her husband, Ron, died of complications from Parkinson’s disease in July 2017. In his memory, Elson took on the role of volunteer coordinator for the Parkinson SuperWalk Comox Valley.

“I’m doing this for him,” she said. “The walk came out of my desire to do something in his memory. He had a struggle. It was a struggle and he was only 73 when he passed.”

While the late Muhammad Ali had Parkinson’s, and actor Michael J. Fox has lived with the disease for years, Elson believes there is always room for more awareness. She wants people with the disease to know that support is out there for them.

“People just don’t need to feel like they’re alone in this journey,” she said. “It’s a tough journey and more and more people are being diagnosed. There are 13,000 people with Parkinson’s in B.C. and they don’t know why, they don’t know what causes it. It used to be a disease for old people but not so much (now).”

“I just think of our own story: My husband was reluctant to join a support group. He was sort of in denial and the support group here is wonderful. The people are so upbeat and positive, and the whole idea of the support group is helping each other, bringing in these programs like the walking group and the boxing.”

The walk is Saturday, starting at the Courtenay Airpark playground.

You can sign up and donate online by clicking here.

You can also register on walk day and donate to the cause then, as well.

It’s a 2.6 km loop along the Courtenay Riverway Heritage Walk.

All of the funds raised stay in B.C. and go to local programs and workshops.

“We had more donations than Victoria, Nanaimo, Vernon… for a small community, we had an amazing response,” she said.

Elson spoke about the origins of the Comox Valley walk.

“We had talked about it in the Parkinson’s group, about having a walk and we started a virtual walk, which is just online. You can walk wherever you live or just do a small walk because there wasn’t really anybody that had the time or the energy to commit to planning a full SuperWalk that they have in a lot of communities.”

After her husband’s passing, Elson decided to take the reins as the local SuperWalk organizer. Saturday’s walk includes a piper, singer, music, prizes, and refreshments.