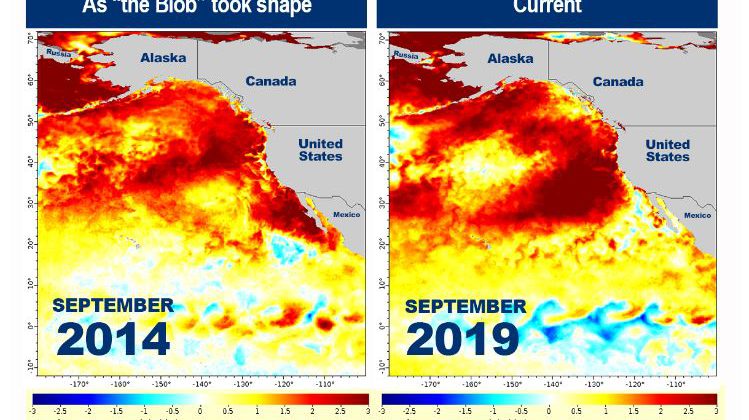 The 'Blob,' then and now. Sea surface temperature anomaly maps show temperatures above normal in orange and red. (supplied by NOAA Fisheries)

About five years ago what is known as “the Blob” of warm ocean water disrupted the West Coast marine ecosystem and hampered salmon returns.

The National Marine Fisheries Service says in a release that a new expanse of unusually warm water has quickly grown in much the same way, in the same area, to almost the same size.

It’s building off the West Coast and stretches roughly from Alaska south to California.

It ranks as the second largest marine heatwave in terms of area in the northern Pacific Ocean in the last 40 years, after “the Blob.”

“Some locations upwards of four or five degrees above normal, especially as you get into the Bering Sea and the Bering Strait,” he said.

“It’s a very wide signal. It’s not technically called the ‘Blob’ like it was in 2014 but it is very similar. It just happens to actually be a much wider, larger surface area.”

Castellan said Environment Canada has been tracking sea-surface temperature anomalies because it has such a big impact on B.C.’s weather.

He said the weather patterns that we have seen over the last several years and particularly in the fall, spring, and summer months were “of conditions” that lead to ocean surface anomalies.

“Alaska and everywhere south of Alaska were under a ridge pattern for much of May, June, July, and August to the detriment of mainland North America where we saw a wetter July than normal,” he said.

The good news is, the service says the 2019 Blob could break up rapidly.

“It looks bad, but it could also go away pretty quickly if the unusually persistent weather patterns that caused it to change,” said Nate Mantua, a research scientist at the Southwest Fisheries Science Center.

Looking ahead, Castellan said this phenomenon will have a big say on how our weather will play out  over the next three months and likely into the new year.

“Currently, the probabilities are quite high to see a warmer-than-normal September, October, November, and throughout that period it decreases in strength so I do think with the fall storms and winter storms, the sea-surface temperature will get eroded as it kind of does every winter,” he said. “And with that we will start to see less of an impact from those waning temperatures. But it’s still very much a possibility that this is something that might last through the winter and pick up again in the spring.”

But will the new heatwave last long enough to affect the marine ecosystem?

Biologists say that its large size means it probably already has.

For example, warmer conditions during “the Blob” left lesser-quality food available to young salmon entering the ocean. It also shifted predator distributions in ways that contributed to low returns of salmon.