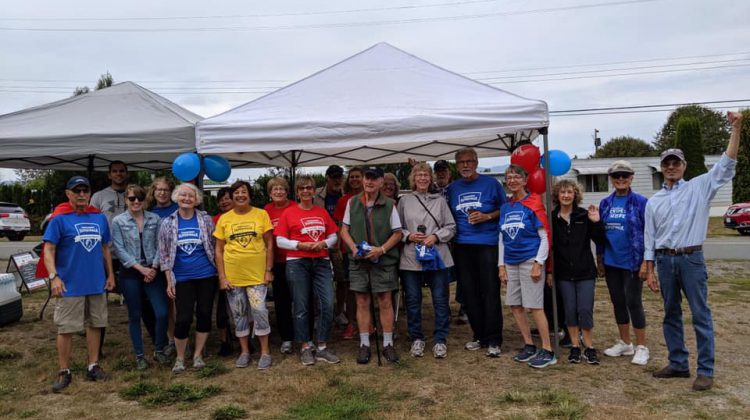 The volunteer coordinator of the Comox Valley’s Parkinson SuperWalk is very happy today.

Marg Elson said Saturday’s fundraiser at the Courtenay Airpark was a huge success.

The local walk raised $13,288 in support of people with Parkinson’s disease.

Donations from SuperWalk events across the country go to support education and support services in the communities where the money is raised.

They also go to research and other national programs like advocacy, a toll-free information and referral line and education for health care professionals.

Reflecting on the weekend, Elson says the region  is a great place to hold a fundraiser.

“It’s just so supportive,” she said. “The energy the morning of the walk is amazing and this is just a supportive community.”

Based on what happened last year, Elson expects that total to go up.

“Last year after the walk we earned another $4,000,” she said. “I know I have friends who said ‘Oh, I haven’t donated yet but I will.’ I just think some people don’t get their donations in right away and other people say, ‘Oh gee, I’d like to donate to that cause, so I fully expect that will be more donations and they are open until the end of September.”

Awareness plays a big role in the Superwalk, Elson noted. “The Parkinson’s support group grew last year. There are more people attending the Parkinson’s meetings. I guess it’s coming close to double to what we used to get for the meetings. That’s a really important sign that there’s more awareness when the actual support group is growing.”

May of them wearing blue t-shirts, the walkers made their way around a 2.6 kilometre loop along the the Courtenay Riverway Heritage Walk Path.

Elson coordinated the Superwalk in memory of her husband Ron, who died of complications from Parkinson’s disease in July 2017.

She said taking on the role of coordinator “feels like the right thing to do, to bring more awareness and to let people know that they’re not alone in this journey because it can be a long journey.”

Elson stressed that putting the walk together was a team effort.

“I don’t do this alone,” she said. “I’ve got a really supportive team, we had wonderful volunteers… it’s a group effort and I just think we’re going to keep this up every year and it’s just going to get better.”

She says the walk is an emotional experience.

“It certainly does bring back memories. And as I see these people struggling with the disease, I just really empathize with them because I know the struggles. But there is such a positive, upbeat group of people. Their lives aren’t easy, some of them.”