Jewelry maker off to Emmys 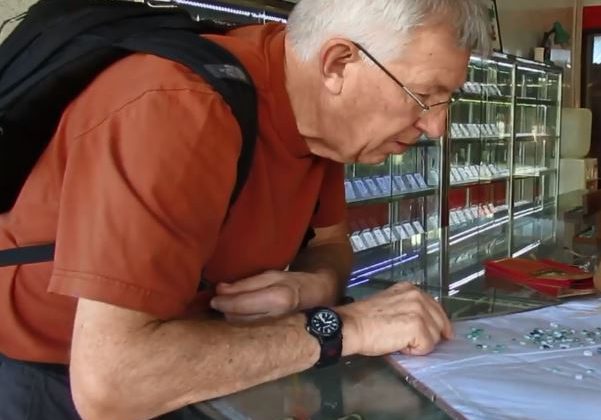 A Comox Valley artist is bound for Tinseltown.

Silversmith, designer, and engraver Dan Walker will be handing out his hand-made wrap rings to Primetime Emmy Awards nominees next weekend.

In the process, he’ll likely be rubbing shoulders with Hollywood celebrities at a private function in Hollywood on Sept. 21st.

Walker said his jewelry caught the eye of a person who works in the entertainment industry.

“This past summer, I was up at Christina Lake, which is an area that I grew up in, and they have a market up there that I’ve been going to for the last couple of years.

“And in the course of doing that I met one lady… who knew another lady… who knew the third lady, Annette. And it turns out, she promotes and is involved with swag bag and celebrity gift-giving events in Los Angeles and one of them was the Emmy Awards.”

She liked Walker’s jewelry art, and invited him to the event.

Walker said he is thrilled about the opportunity.

“It’s always a surprise for me that people enjoy my work as much as they do,” Walker said. “And to think that I could go from small town Comox to Hollywood and the Emmys is a bit of a shock, yeah.”

Walker and his wife are driving down to L.A. to attend the pre-Emmys function.

He has no idea who they’ll be meeting in Hollywood.

“I’m sure (it’s going to be) everybody involved with all the different programs including the stars and all the technical staff. It’s wide open.”

Walker chose to give away 120 wrap rings adorned with copper sand dollars. 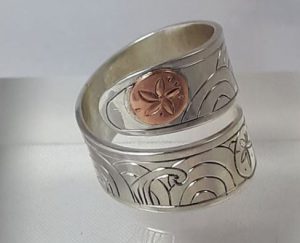 And while he won’t be getting paid for the pieces, Walker knows that he’ll be enjoying a massive amount of exposure.

“It’s a marketing opportunity to get my stuff out there,” he said.

Not bad for a 66-year-old retiree who only started making jewelry two years ago.

From there, he started his own business, Walker Designs,  and works from his home studio in the valley.

“Because I have these jewelry items, I like to sell them (and) share them with the world, so I’ve been attending different little markets that I find,” he said.

“Locally, I’ve done the Filberg and some Christmas markets.”

The married father of four grown children was an industrial refrigeration mechanic before he retired.

He has lived in the valley for 38 years.

In the past, he designed and built hot rods; his current ride is a 1948 Stylemaster.

“I’ve always loved working with my hands and I have an artistic bent to me,” he said. “I was building hot rods when I first retired and that’s been a lot of fun. And (in) some of my travels, I met a Navajo silversmith, an old gentleman, and what he was doing was really intriguing. And when I came back here and saw that North Island (College) was running silversmith programs, I became involved.”