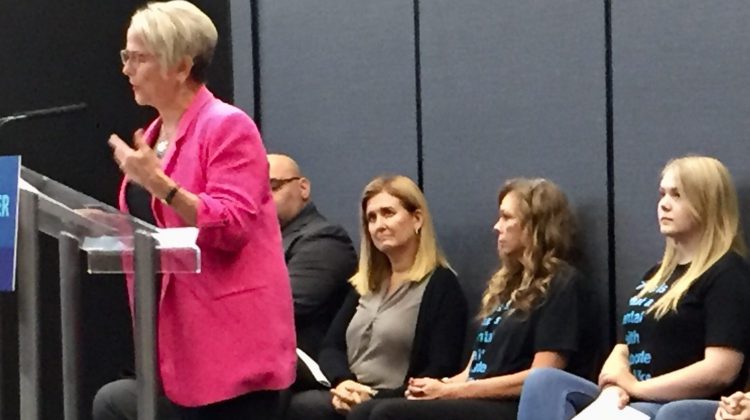 The Comox Valley School District is getting a ‘one-care’ plan approach to mental health services.

The province says integrated teams will offer wraparound care to students and their families.

This means students with mental health and substance use challenges won’t have to retell their stories to different care providers.

It’ll also mean that they won’t have to search on their own for the supports they need.

Darcy said that “for far too long, families have had to knock on door after door to get the help they need for their children.”

Darcy noted that the Comox Valley is the second school district in B.C. to introduce leading edge mental supports for students.

She added that these teams streamline the support system.

“Instead of what we have too often, now, which is a fragmented and hard-to-access system of the past… where parents, families, teachers and caregivers have to try and cobble together a confusing array of services in order to support young people who need support, this is going to be an integrated model with one care plan.

(It’s) a plan that focuses on prevention, early intervention, and care that really wraps around the young person in a way that’s best for them. One that embraces families as part of the support system, and one that makes use of one of our greatest assets, which is our schools.”

Darcy said people are  said mental health affects all of us.

“It affects every community, everybody across the province.”

Darcy said the goal is providing immediate support to those who need it.

“Ask once: get help fast, without having to knock on one door after the other, without having to tell and retell your story to one person after another, which if you are pretty stressed or angry to start with, the process will just make that far, far worse,” she said.

The Comox Valley district already has proactive measures already in place. These measures include:

“It’s crucial we support wellness and mental health in schools, so kids can focus on reaching their full potential,” Fleming said. “As teams are put in place in more school districts throughout B.C., students and families will have more accessible, integrated mental-health supports in their schools and in their communities.”

Additional integrated child and youth teams, which were introduced as part of the A Pathway to Hope road map for better mental health and addictions care, will be established in three more school districts over the next two years.

The first team, in Maple Ridge-Pitt Meadows, was announced in July 2019.

The teams will be formed in the valley in December.

Implementation will follow and new positions will be determined based on service delivery gaps identified in the area.

The province says that it will also be providing teachers and school counsellors with more resources to help them identify students who need support earlier, before small problems become more serious.