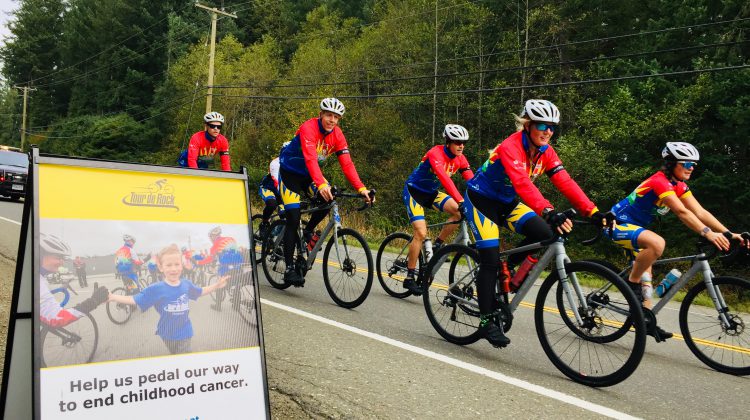 Tour de Rock cyclists made their way along Highway 19A en route to the Merville Hall on Wednesday morning, September 25, 2019. (Troy Landreville,MyComoxValleyNow.com staff)

For Gord Burton, being part of the Cops for Cancer Tour de Rock is a journey, both physically and emotionally.

The military police officer with CFB Comox is among the police officers, firefighters, and citizens riding 1,000-kilometres across Vancouver Island.

The two-week trek from the northern to southern points of the island is an annual fundraiser for pediatric cancer research.

During a stop this morning at the Merville Hall, Burton said he is fulfilling a long-term dream by being part of the Tour.

“I’ve been following the Tour de Rock, Tour de Coast,  (and) Tour de Valley for a number of years – it’s just an amazing cause. We’ve all been touched by cancer in one form or another and I thought, ‘If I ever get into law enforcement, if I’m ever a police officer, that’s something I’d like to do.’ And guess what? Here I am.”

Burton said has had friends and family members who have lost battles with cancer so the cause is close to him.

“Being involved with the Tour de Rock, here, as a father, it’s not something that I’d wish any parent to go through, so I figured I’d want to do my part.”

Burton described the experience thus far as a “melancholy of emotion.”

The biggest impact, he said, are in smaller communities where residents have opened their hearts and wallets for the team.

“Everyone’s excited to be here and you get to experience some of these smaller communities. The amount of giving that they have and they have nothing there,” Burton said. “The mill’s shut down in Port Alice and they’re still out, giving us money for the tour. It’s incredible.”

It hasn’t taken long for a bond to form among the riders, Burton noted: “It’s a family now.”

Burton’s supporters have come through in a big way, because he’s far exceeded his fundraising goal of $5,000. His total as of Wednesday morning is a whopping $17,589.

In his bio, Burton said, “the money raised from this event helps fund leading-edge cancer research that is improving cancer treatments, preventing cancer and saving lives.”

He added, “As a parent, I can’t imagine the pain families go through when their child is affected by cancer and I felt that I should play a part in helping put an end to paediatric cancer.”

The team is spending the day in Courtenay and Comox and continues on to Cumberland, Union Bay, Qualicum and Parksville tomorrow.

To date, Tour de Rock has raised more than $25 million for pediatric cancer research and support programs, and has spawned three other similar Cops for Cancer rides elsewhere in B.C.