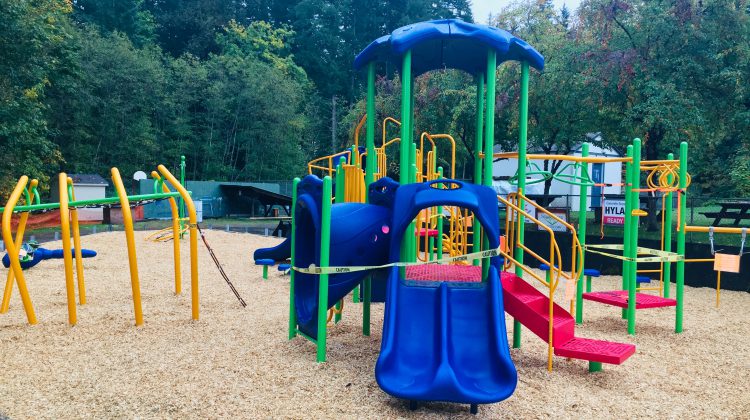 The new Black Creek Community Centre playground is about to be unveiled.

The grand opening of the Black Creek structure is this Tuesday starting at 5:30pm.

The structure at 2001 Black Creek Road replaces 30-year-old equipment that was outdated, and showing serious signs of wear and tear.

Black Creek Community Association executive director, Dana Starritt, said it took all of three days to build the playground from the ground up.

“It was an incredible thing to witness, actually,” Starritt said. “There was the engineers and designers from Suttle Recreation and the advance team from BCAA and then our lead volunteers from Black Creek Community. We did the layout of the playground and dug the holes with an auger.”

The next day BCAA arrived with a busload of 30 employees and within three hours the structure had taken shape.

Yesterday, Hyland delivered the concrete which was poured around each post, and the wood fibre surface was put down on the property.

Looking back, Starritt said having a new playground seemed like an impossible dream.

“But so many people in the community were really committed to it and then this opportunity through the BCAA Play Here Competition came up and the entire community rallied behind this in a huge way. It’s a lot of work to get all that voting to come out in the top three and actually get the $100,000 revitalization award.”

The group decided to use the prize money solely towards the play structure which meant that it would be as transformative a play space as possible, Starritt said.

“We could have used some of the prize money to do all of the preparation for the site and we instead had an incredible response from local businesses who have donated huge amounts of labour and resources to getting the site prepared.”

She noted two local contracting businesses, Coast Catalyst Construction and Tipping Point, that donated all of the machinery, labour, and materials to build the concrete border for the new expanded site.

“That was absolutely key to the whole thing being possible,” Starritt said.

The playground should be well used and could be a destination spot for kids from neighbouring communities, Starritt believes: “It’s a great thing for the Pumpkin Patch Nursery School, those kids will be using it all the time and for the kids that come to use the youth programs at the community centre, it’ll be well used.

“But we believe kids might be coming from different areas like Campbell River as well as Courtenay/Comox to use the structure because it’s one of those big, new exciting play structures that people travel to, to take their kids to a new play space.”

The ribbon cutting will be done near the start of the grand opening, which runs until 7:00pm. There will also be a prize raffle draw with local businesses donating prizes.