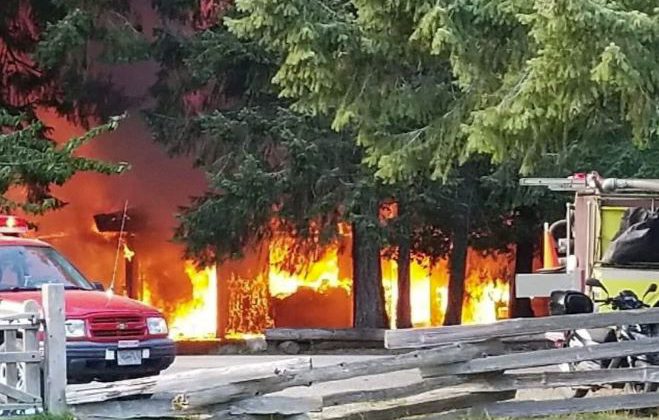 The community is rallying around a man who lost everything in a fire on Denman Island.

A GoFundMe page started yesterday has already generated more than $2,100, and is inching towards its goal of $3,000.

The fire happened on Oct. 8 in a two-storey commercial building across from the community hall.

Colby O’Neill launched the GoFundMe on behalf of his 28-year-old brother, Lynden.

Colby said his brother lost “every single thing he has ever owned in his life” in the fire.

This includes all of his clothes, ID, computers, TV, microphone (for recording), video games and consoles, and journals.

Colby said he is trying to look at this like a fresh start for his brother but “he needs help getting going again.”

He believes that the fire started in the building’s kitchen.

“He (Lynden) was asleep above the fire, actually, but got out safely,” Colby said. “The house went up in probably 20 minutes, the whole thing, so he just got out of there with the clothes on his back and one computer and some of his recordings. He raps, and that’s kind of like his main artistic outlet.”

“We live on Denman Island and we have a very strong community and I have a pretty big social network, as well,” he said. “It’s been really awesome to see, but I’m not too surprised. People here really take care of each other.”

Colby noted that the funds will go toward replacing the things that Lynden lost in the fire, and to “figure out a new living situation for him.”

Colby said his brother is faring better than expected.

“I think that this little campaign and the support the community has shown has been really uplifting for him to see. It’s been a weird week but it’s been really awesome to see people step out and want to help and take care of each  other.”

The GoFundMe page will run for a few more days to help Lynden get on his feet and move forward with his life, Colby added.