Trio of chalets wiped out in Mt. Washington fire 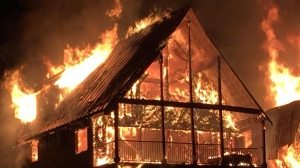 A fire has destroyed three private chalets on Mount Washington.

Witnesses say the fire started at around 10 p.m. Thursday night in one chalet, but soon spread to the two neighbouring buildings.

Courtenay Fire Chief Don Bardonnex is asked why no fire crews were dispatched?

Bardonnex clarifies under what circumstances the province would order his fire department to respond to a fire outside the Courtenay Fire Protection District.

Only one chalet was occupied. Everyone got out safely. The chalets are located on Fosters Place. An earlier proposal by the Comox Valley Regional District to set up a fire protection service with volunteer firefighters on Mt Washington failed to materialize, with residents shooting it down in a referendum in 2003. Bardonnex confirms Courtenay Fire crews did respond to a chalet fire on the mountain back in 2009, but that was because all of the residents had not been accounted for so the risk of injury was a factor. He says last night when the residents were accounted for, the decision was made not to respond.