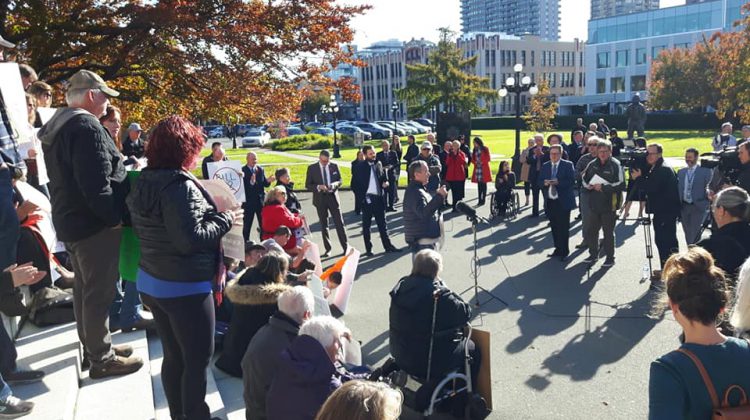 A group protesting changes to Bill 52 gathered outside of the B.C. Legislature this morning. (Chris Watt, Facebook)

Critics of the remodelled Bill 52 say it’s punishing small farmers and their families.

That’s why they gathered at the B.C. Legislature this morning to protest the changes to the bill.

The farmers say the changes cripple their ability to age in place.

The Facebook group ‘Changes to Bill 52’ says legislation passed last November removes the ability for an ALR owner to have a secondary, non-farm use modular dwelling for immediate family.

The group says these changes “stand to devastate the farming and family planning of past, current, and prospective farmers by severely limiting how they can reside on and support their farms.”

However, the province says that it made these changes to preserve as much land as possible for farming.

It also says they’re meant to “end the proliferation of large mansions and lifestyle estates in the ALR which inflate land prices and place agricultural land out of the reach of current and new farmers and ranchers.”

Fiona McQuillan, who owns and operates Fireweed Farmstead in Merville, supports the group.

McQuillan said she and her husband purchased the farm about three years ago, and have been trying to build a mixed, vegetable/egg/pork farm with a goal of having an agri-tourism operation.

She said she was not aware of the changes being proposed.

“Apparently they had reached out to stakeholders but in our opinion, it was obviously extremely limited. It was a very, very small component of ALR stakeholders.”

McQuillan said the legislation is a reaction to what was going on in places like Richmond, where huge homes that included tennis courts, and swimming pools were built on what was clearly intended to be farmland.

But she believes the province has based the changes in one area without taking the diversity of farming operations across B.C. into account.

“They are diverse enough on Vancouver Island, let alone taking what’s going on in Richmond, and making those laws apply to people in the Chilcotin. It doesn’t work.”

McQuillan said she understands the motivation to preserve agricultural land but she believes the province is going about it in the wrong way.

“The way they are doing this is they’re shutting down opportunities for farmers to actually make money and make farming a viable job, a viable economic opportunity and that’s one thing that really bothers me,” she said.

The changes erase many farmers’ vision of handing down their farms to their children, McQuillan said.

“They put in all this effort, and money, and passion into their farms and want to pass it down to their families and have some of their family members there to help them out, to continue this farming legacy, and the government sort of pulling that rug right out underneath them, and that’s not fair.”