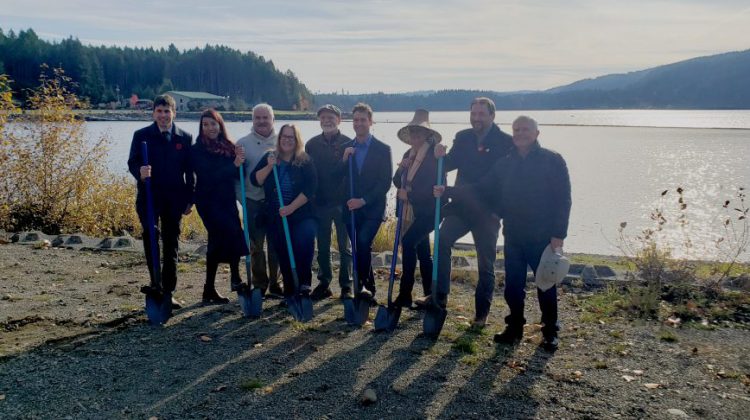 Photo of CVRD board staff, K'omoks First Nation members,. and others at the offical kickoff to the CVRD Water Treatment Project, Oct.30th/2019( Taken by Jon Gauthier, My ComoxValleyNow.com Staff)

The grand opening of the CVRD Water Treatment Project project kicked off today.

Members from the CVRD, The City of Courtenay, the K’omoks First Nation and others gathered near Comox Lake for the official kickoff to the two-year project.

Courtenay Mayor and CVRD Board Chair, Bob Wells was in attendance and says it’s good to see the project get started.

“This project has been a long time coming. If we look back at December 2014, that’s when we had a 46-day boil water notice, and for us, it really put us on notice that we had to get working on this water treatment project,” said Wells.

He added that the biggest change people will see once the project is complete is the end to boil water notices in the valley.

“The level we were supposed to be hitting was one NTU and at the time we were at five or ten times that amount.”

“The water coming out of here is going to be less and 0.3 turbidity, so we going to be well below that threshold,” Wells added.

K’omoks First Nation Hegus, Nicole Rempel says the project is taking steps to better the lives of everyone in the Comox Valley.

“It’s fantastic, its really exciting day for the Comox Valley as an entirety but also for the K’omoks First Nation working in partnership with the CVRD to co-manage the resources within our territory.”

The project is estimated to cost $126 million and will be paid in part by reserves, grant funding, and taxpayers.

The CVRD says only those connected to the new water system will be responsible for paying an average cost at around $86 per household, per year.

To learn more about the project and to see the estimated timeline for completion, click here.