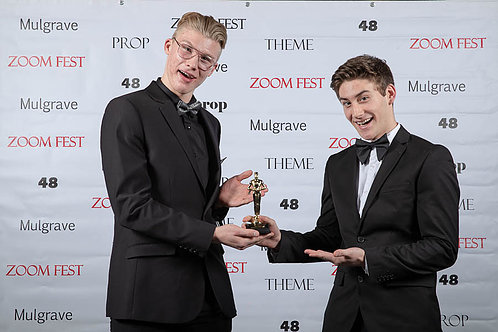 It’s a chance to show your short film on the big screen.

Ian Boyd and Oscar Wolfgang, both 18, are partnering with Volunteer Campbell River to organize the Vancouver Island Youth Film Festival.

The deadline to submit your entry is Nov. 29.

“People essentially have a month to make their film,” Wolfgang said.

Once all the entries are collected, a three-week judging period will lead to award night on Jan. 10 at the Timberline Theatre.

Wolfgang said everyone is welcome to come and check out the winning films.

“The films that win will be be shown that night. Everybody who is entered is welcome to come. “

The theme “community” is open-ended.

“We chose to keep it vague so people can interpret community,” Wolfgang said. “However you want to take the word ‘community,’ make a film about it.”

Films must range between two and seven minutes in length and offensive language must be kept to a minimum.

Hate and violence won’t be tolerated.

“Just keep it PG 13,” Wolfgang said. “It (awards night) is going to be an event where anyone can come so we obviously don’t want films that children shouldn’t see.”

Boyd said high school students can use the time that it takes towards making their film as volunteer hours, which will go towards graduation.

“Pretty much doing this film festival could give you the amount of credits to graduate within a month and have fun while doing it, too.”

The two organizers have made a dozen short films together including This Is Home, which won Best Screenplay at the Zoom Film Festival.

This Is Home will be shown at the Campbell River Festival of Films happening Nov. 12 at the Tidemark Theatre.

Boyd and Wolfgang will be there to promote the local festival.

Looking at the event as a whole, Boyd said they wanted to put together a festival together that’s close to home.

“We found our love for filmmaking through the Campbell River Festival of Films and we’ve done other film festivals together and we really found a love for it,” Boyd said.

“We felt that there wasn’t that many (festivals) in Campbell River, especially, that we experienced because we always had to travel to go to film festivals. So we thought, ‘Hey, let’s give back to the community that gave to us so much and helped us out so much, that, why not just try to make something here.”