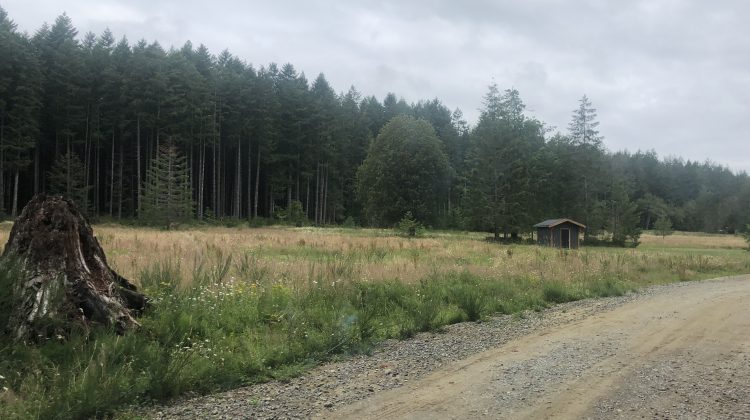 Land near where a composting facility is proposed at 6300 Argonaut Road. (Supplied by Amie Baskin)

A proposed compost facility in Campbell River isn’t sitting well with its neighbours.

On Monday, council adopted a zoning bylaw amendment that will pave the way for site-specific use for the facility at 6300 Argonaut Rd.

The city says it has already received approval by the Agricultural Land Commission and is supported by the Regional Solid Waste Management Plan and the city’s Sustainable Official Community Plan.

Councillor Charlie Cornfield said at Monday’s council meeting that “with the reduced footprint size with the ALC only allowing (the) use of the current disturbed site, and it will buffer significantly from the other properties who voiced concern, and also we did get some assurances that there would not be any wastewater or any storage on bare ground of the facility, that it’s all indoors, and odour management is a high priority on the list.”

Amie Baskin and her family, including her husband Troy Burley and their one-year-old son, Gordon, live next door to the proposed site.

Baskin said she has “a lot of problems” with the proposed site, based on reports on the Comox/Strathcona Waste Management and the Comox Valley Regional District websites.

“They cite in there that residents in the area could be affected by noise, odour, dust, increased traffic, etc., and so obviously all of those things are of great concern to me,” Baskin said. “As well, my well is very close to this location. They say they are going to pave it, but tell me what happens if there’s an earthquake.”

Baskin said she has researched the technology being intended for the facility.

“It’s called Static Aerated Pile technology. Basically, they pump air through the compost and turn it at very specific time intervals in order to process it inside. But this type of technology produces a lot of heat so it obviously requires a lot of water so it doesn’t light on fire,” Baskin said.

“After reading their water monitoring report that leachate continues to be observed, I am a bit concerned that they are going to use contaminated water to make their compost which, as far as I can tell would make contaminated compost.”

She believes that it’s the wrong place for a composting site.

“They don’t have domestic water or sewage up here. We’re on well (water) in the septic so if they can’t use the contaminated water to make their compost they’re going to have to truck their water in. They also can’t process it here. They don’t have any other way to get it out so they’ll be collecting their leachate and trucking it the Norm Wood Environment Centre where the wastewater treatment plant is.”

Baskin believes the technology proposed for the site is easy to mess up.

“If your timing isn’t perfect if you don’t have the right amount of water, because of the heat and chemicals that it produces, it’s what produces acid rain, so it wouldn’t be a concern for me next door, it would be a concern for anyone in the area if something were to go, not quite perfectly.”

The service’s senior manager, Andrew McGifford, said the facility will divert organics, including food and yard waste from the landfill.

Concerns at a July 8th public hearing focused primarily around the potential effects on water quality and impacts on adjacent properties.