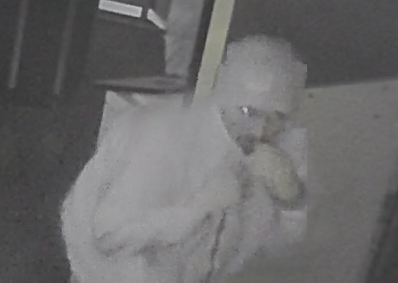 The Campbell River RCMP are looking for the public’s help in identifying four suspects in an early-morning break-in.

Between 1:15am and 1:30am on Nov. 13, two suspects broke into Quinsam Communications on 16th Avenue by smashing the front door glass. 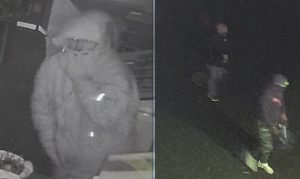 The third suspect (left), and the first two suspects in the Break-in at Quinsam Communications. (Supplied by Campbell River RCMP)

The second one wore a dark puffy jacket, blue jeans, dark sneakers with white soles, and a reddish coloured toque.

At 4:45 am, a third suspect entered the business through the broken door.

He appeared to be male as a moustache can be seen just above his pulled up jacket.

Then, a fourth suspect entered through the broken glass at 6:03 am, clearly had a goatee. He wearing an oversized jacket

The owner arrived shortly after the fourth suspect left the scene.

Anyone with information on this break-in, has dash-cam footage during the time of these crimes, or recognizes the suspects, is asked to call Campbell River RCMP at 250-286-6221.