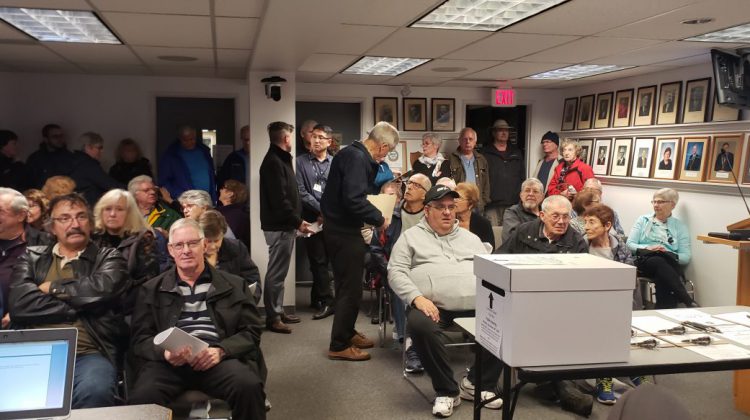 Courtenay residents came out to Council chambers to voice their concerns on a new apartment complex on Mission Road. (Taken by Jon Gauthier, MyComoxValleyNow.com Staff)

Some Courtenay residents had the chance to share their concerns for a new apartment complex in the works.

The building would be located at 2600 Mission Road, near Veterans Memorial Parkway and across from Queneesh Elementary School.

The discussion last night was for Bylaw 2963, which would change the zoning to allow for the apartments to be built.

Over 40 residents showed up to Courtenay council chambers last night to share their thoughts on the proposed project.

One of those residents was Debbie Baier. She said the project looked promising at first but was disappointed to learn it would be four storeys high.

“When I first heard (council was) resuming that to residential I was quite happy cause I like that better than what you had before. Everything I saw in relation to this I thought was townhouses. It was only in the last report that I found out that it’s an apartment complex and they are four floors high, and that’s for me two floors too many,” said Baier.

While many shared the idea that the height of the proposed 95 unit multiplex was too high, another concern for residents was the increased traffic and the topic of safety.

Murray Little said the city should take a second look at the complex and come up with a better solution.

“I still have concerns about the safety of current residents. To school goers and local traffic, and I regret that I still do not have confidence in the Transportation Report.”

“The city should undertake a study or an independent contract to test some of these uncertainties on a wider scale. Let’s make sure this time that the solutions are the best they can be and take consideration of the long term. While I agree that the city needs more rental accommodation, that does not mean safety has to be compromised to achieve this out,” said Little.

Gary Rowlins, a resident in the Cascara Crescent neighbourhood mentioned that he heard another apartment complex is in the works at 2700 Mission road and it would just be too much congestion for the area.

The next step is for council to give Bylaw 2693 a third reading before approving or denying it.

If you want to keep up to date in the process or see any documents associated with it, visit the City of Courtenay’s Development Application Tracker.