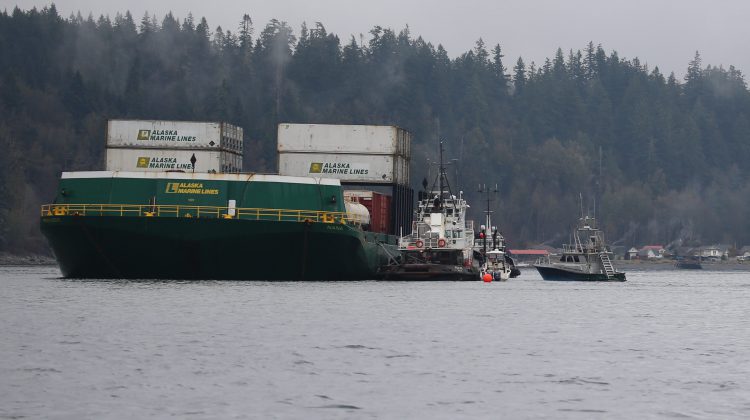 The barge Nana Provider. (Supplied by the Canadian Coast Guard)

The Canadian Coast Guard is responding to concerns from the Wei Wai Kum First Nation, regarding the grounded Nana Provider barge.

The barge ran aground next to Quadra Island on Nov. 9 and was moved a short distance to Duncan Bay last Friday.

The Wei Wai Kum is upset by what it calls “the lack of consultation from Transport Canada and the Canadian Coast Guard.”

The nation also calls the dismissal of requests for involvement, in such a high-profile marine incident in its traditional territory “unacceptable.”

The Coast Guard said that during this incident, it attempted to advise many Indigenous communities in the area of Quadra Island.

“Unfortunately, several of the notification emails were returned as ‘undeliverable,’” the Coast Guard said in an email.

“We were able to identify the email errors and forward information to the correct contacts.”

The Coast Guard said it is “continually working to improve this notification process and looks forward to further engagement on preparedness and response along the coast.”

The Coast Guard said that the significant likelihood of release or actual spill of any type of pollutants from the barge was “very low.”

“The barge was carrying cargo on deck only (no cargo or bulk fuels in the hull of the barge).  The railcars on deck remained structurally sound and well secured throughout,” the Coast Guard said.

The Coast Guard said its primary role was to monitor for any signs of pollution and that there were none.

“The situation was primarily a vessel salvage operation led by Transport Canada,” the Coast Guard added.

“If there had been a significant release of pollution, the Canadian Coast Guard (as lead agency for marine pollution response) would have stood up an Incident Command Post and used a Unified Command Structure to manage the spill response.  As noted, this was not required in this incident,” it said.

“Similar to accidents on land, marine incidents do happen. Coast Guard leads regular first responder marine training exercises in Campbell River and in other coastal communities in British Columbia. Practice makes proficient: exercises are an opportunity for First Nations, agencies, and communities to validate plans, enhance readiness, and work together to practice for all types of marine incidents.”