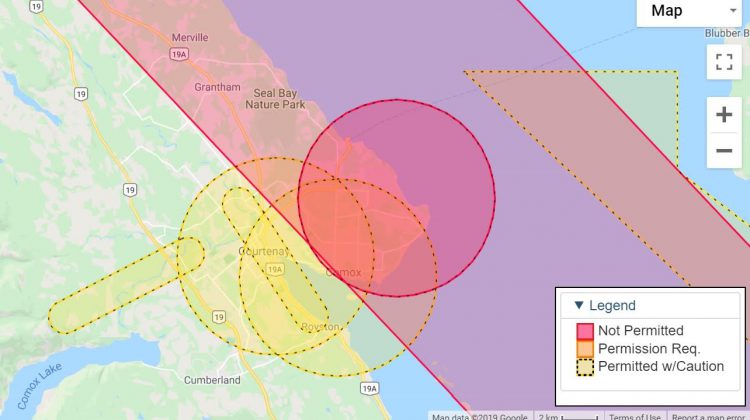 Military areas and airports are no fly zones for drones.

It’s a reminder that 19 Wing Comox and the Comox Valley Airport is sending after an incident  on Wednesday.

The pilot of a CC-115 Buffalo from 442 Transport and Rescue Squadron was doing routine training around the airport, when he spotted a drone flying beneath him at around 2,500 feet.

The Buffalo was flying at roughly 3,000 feet.

The drone had not only encroached into the airspace, which no drones should be flying within 5.6 kilometres of the airport,  but was flying adjacent to one of the main runways near to the golf course.

Capt. Frank Jaerschky, from 19 Operation Support Squadron, said that while there was no risk of collision, a drone in that airspace “is of concern.”

“The pilot was able to actually follow the aircraft and observe it land, and after it landed the military police were called and they did actually go out door-to-door looking for the individual who was operating the drone but they were unsuccessful in finding him,” Jaerschky said.

Jaerschky said the risk of collision is real.

“As to have much damage a drone would do if it hit an aircraft in flight, it’s impossible to say,” he said. “It could go from minor to severe.”

He said a collision has the potential of short-circuiting a search and rescue mission.

“The pilot and commander of that aircraft would have undoubtedly declared an emergency and returned to base to land and that search and rescue mission would not have taken place,” Jaerschky said. “And they are obviously putting lives in danger because that aircraft and crew cannot go out and do its job.”

Jaerschky said this is the second such incident this year in the valley.

Comox Valley Airport operations manager, Alex Robertson, a wayward drone has the potential to cause major headaches for staff and travellers.

“For us, it’s more of the impact on airport closure it would cause, ruining travel plans for passengers that might be commuting for work, might be travelling for leisure, or visiting family and friends. A closure would have economic consequences for the whole Comox Valley.”

Jaerschky said, with Christmas right around the corner, “it’s a matter of education.”

“Education and prevention are the keys to this,” he said. “The rules governing drone operations are quite complicated. I’ve been an air traffic controller for 30 years and it took me a while to wrap my head around this.”

Transport Canada’s website has an interactive map that shows you where you can and can’t operate drones, as well as different types of licenses and how to get them.

Operators who fly drones where they aren’t allowed could face fines ranging from $1,000 to $3,000.

To find out more about drone safety, rules, and where you can fly your drone, click here.

You can also find information on drone awareness on the Comox Valley Airport website. Click here for details.