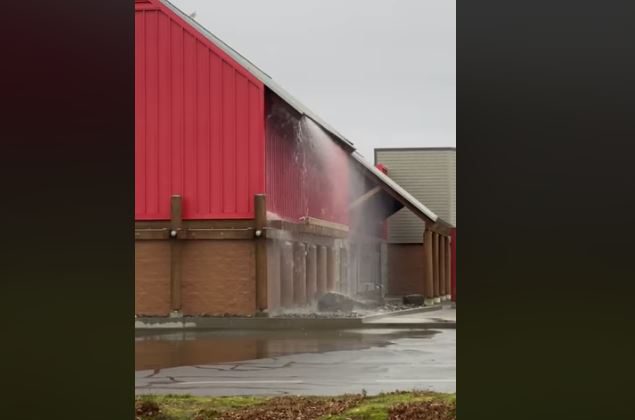 Faulty sprinklers at the old Target store this morning won’t put a damper on food donations this Christmas.

For 46 years, The Knights Of Columbus have been helping struggling individuals and families through their Community Christmas Hamper Fund.

Gearey said that just a small percentage of their food donations are stored there.

“Right now, there is just the food that we got off the Fill The Bus (campaign),” Gearey said. “So there’s not a whole lot. There might be five percent of the food that we are eventually going to use. And we are not in the Target area where the shopping occurred. We’re in the area of Target where they used to have all of their storage – their backroom sort of thing where it’s cement floors, cement and so on.”

Gearey said most of the food is ordered during the first week of November and is delivered about two weeks before delivery day.

“That’s when the 18 wheelers will come in and drop off the canned goods and dry goods and so on, and all of our perishable stuff goes to a cooler north of town, there’s a company there that takes care of all of that for us – the turkeys, hams, cheese, carrots, and the margarine… they store that for us until the day we need it,” he said.

Campbell River fire chief Thomas Doherty said the building is equipped with a dry sprinkler system for areas outside under the awnings.

These dry systems are normally charged with air (which holds the water valve closed) to eliminate the risk of the sprinkler line freezing outside.

Doherty said that when a sprinkler head activates on a dry system, or when the air compressor fails, the air escapes the system and the water valve opens which flows water to the dry system.

“In some circumstances, the dry systems will charge when the compressor fails, but no sprinkler heads flow until the head itself activates due to heat, or damage,” Doherty said.

“Today, a sprinkler head on the dry system activated (failed for some reason) outside the building, there was no fire,” Doherty added.

“We were able to isolate the sprinkler system by shutting down the isolation valve to the dry system. There was no water damage to the building.”