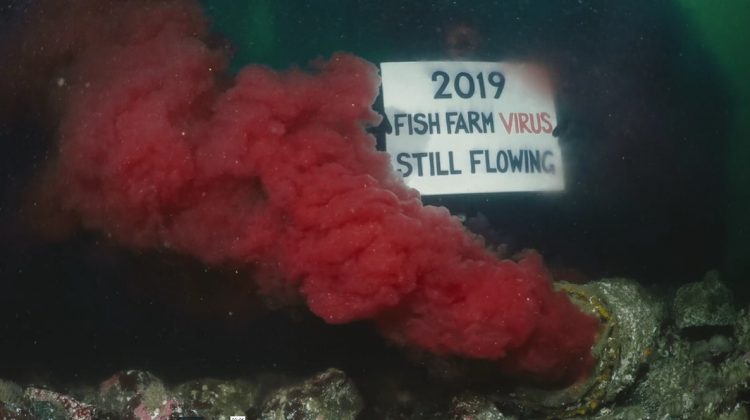 Campbell has just released a new video showing an identical stream of red waste. He says test results on recent samples taken from the outfall pipe show that the waste is still contaminated with PRV. PRV is a disease that comes from the Atlantic Ocean and is harmful to Pacific salmon.

Brown’s Bay Packing Co. has released a statement in response to the video. Written by Managing Partner Dave Stover, the statement says the company hasn’t seen the video or the lab results on Campbell’s samples.

Stover says the first video from back in 2017 “understandably prompted concern from government, First Nations, our neighbours, our community, the industry, and our employees.”

He says they are held to the highest standards in Canada by both the provincial and federal governments as well as third-party regulators such as the Aquaculture Stewardship Council.

Stover says that since the BC Ministry of the Environment brought in its new waster water treatment permit standards, Brown’s Bay Packing Co. has spent $1.5 million to improve its treatment technology.

You can read the full statement here.

For his part, Campbell says Fisheries and Oceans Canada is tasked with both regulating and promoting the fish farming industry and “this conflict of interest is leading them to ignore the law and continue to allow infected farmed salmon to be transferred into the ocean.”

He’s encouraging people to reach out to the federal government to ensure the Liberal Party of Canada keeps its promise to “solve this problem by transitioning fish farms out of the ocean and onto land by 2025.”

UPDATE: The Aquaculture Stewardship Council has reached out to MyComoxValleyNow.com with this clarification:

“Brown’s Bay Packing is not certified against the ASC Salmon Standard, which covers social and environmental issues, but is a Chain of Custody (CoC) certificate holder. The purpose of CoC certification is to ensure that ASC certified seafood can be traced along the supply chain from farm to fork – it does not cover environmental impacts and it is misleading to suggest otherwise.