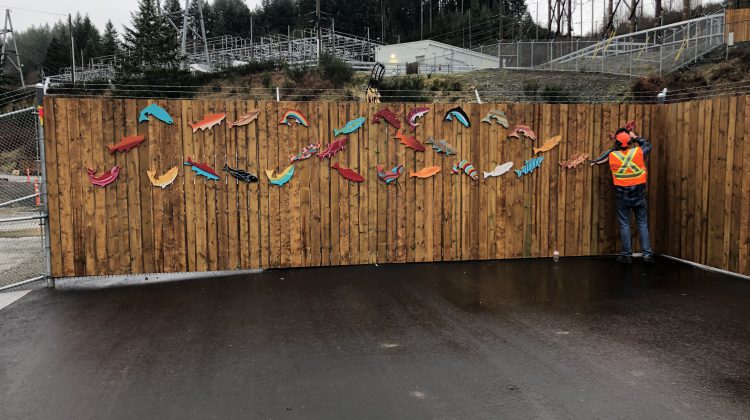 A part of the new Canyon View Trail route includes a lookout area where the old powerhouse once stood. Thirty colourful cedar salmon have been placed on one of the lookout walls. (Supplied by BC Hydro)

By noon Wednesday, they’ll have the Canyon View Trail loop in place to walk up and down either side of the Campbell River.

BC Hydro spokesperson Stephen Watson said this is an important trail, adding that the utility company is very excited it’s reopening through its John Hart property.

“The new trail through the old John Hart powerhouse footprint, with an interpretive lookout over the river, and the solid wooden stairs up the slope to connect into the existing trail, are all ready to go,” Watson said.

“We appreciate people’s patience. I have a feeling people will enjoy it.”

The Canyon View Trail was in place along the river until 2014 when it was closed off for the construction of the John Hart Generating Station Replacement Project.

A temporary trail, called the Station View Trail, was put in place to allow for the trail loop to continue through BC Hydro’s property during construction, though it was closed in April 2019 to allow for the decommissioning work of the old hydroelectric facility.

BC Hydro says it is following through on its community commitment in putting the trail back along the river.

The trail opening will provide the opportunity for interconnecting trails around the river, the trails around the Elk Falls Provincial Park, including the Elks Falls suspension bridge, and the Campbell River Hydroelectric Facilities Discovery Centre.

For many years BC Hydro has been consulting with First Nations and the Campbell River Hydroelectric Facilities Liaison Committee, which also included a Recreation Advisory Committee.

“This is the last main public interfacing milestone on the project with the restoration of the trail access,” said Watson.

“Since 2007, we have really appreciated all these years of community engagement on our John Hart project in order for us to build a seismically safe, reliable underground powerhouse that also protects downstream fish habitat with dependable river flows, and while doing so, consider the community concerns and opportunities. For the recreationally minded people in the community, from the Elk Falls suspension bridge to this new and improved Canyon View Trail loop, there are nice win-win outcomes.”