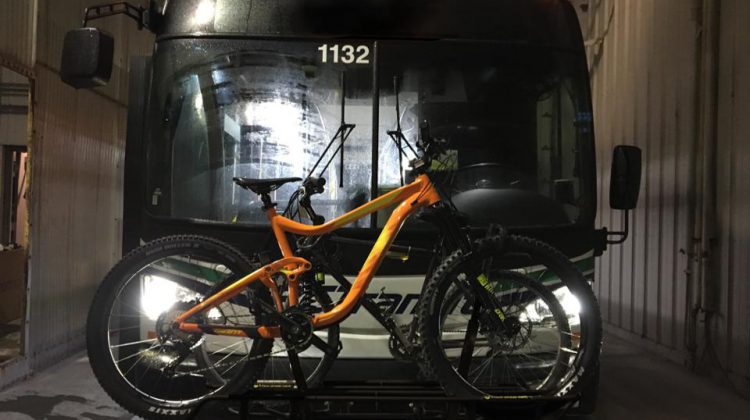 Taking your bike with you when using public transit is becoming more convenient.

BC Transit has begun to phase in new bike racks for buses across the province, accommodating bikes with tires up to three inches.

“The use of bike racks is increasing in popularity with transit riders across the province using them for a variety of reasons,” says BC Transit. “However, bikes come in a number of sizes and customers expressed their need for a bike rack that could accommodate bikes with tires larger than the previous two-inch maximum allowance.”

Many different bike racks were tested throughout the process, with the Apex 2TM by Sportsworks best suited to BC Transit’s safety and customer experience requirements.

For accessibility and safety reasons, bikes cannot be on board, therefore, the racks are located on the front exterior of each bus.

Currently, buses in Whistler, Nanaimo, Kamloops and Squamish are already operating with the new bike racks.

BC Transit says the rollout in the rest of its communities will occur in one of two ways.

“New buses will be delivered to BC Transit with the new bike racks installed while existing buses in the fleet will have the bike racks replaced as they are damaged.”

BC Transit’s fleet size includes 1080 buses, with approximately 914 of those buses already equipped with a bike rack.

“With around 200 new buses planned to be purchased with the new bike racks installed over the next two years, it will likely take several years before all buses are equipped with the new racks,” BC Transit added.