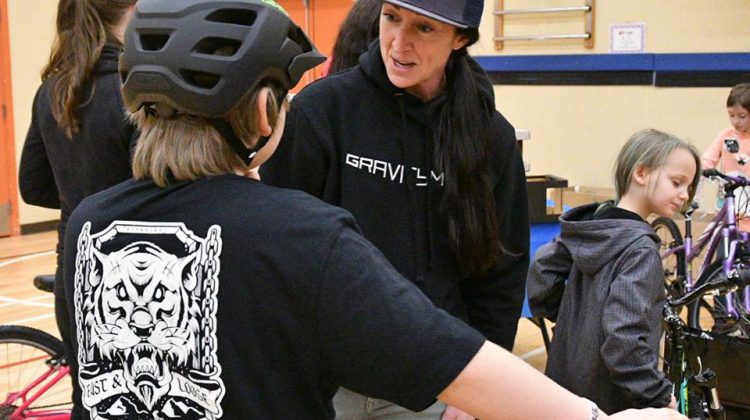 It’s Christmas in January for 14 students from Courtenay’s Arden Elementary.

Each received a brand-new mountain bike yesterday, through the Pink Bike Share the Ride program.

Rebecca Stewart organized the event. Just under a year ago, she applied for funding to host a Share the Ride event in the Comox Valley.

“I finally got the word in the summertime, that we were going to get a budget to be able to get some kids some bikes,” Stewart said.

Stewart reached out to local schools that met the criteria for an event.

Arden Elementary teacher, Kathy Segriff, passed along a list of 14 students who she felt would benefit from having a bike.

“She thought it was a pretty hefty list, but we were able to get it done with the help of my sponsor Specialized (Bicycles),” Stewart said.

The kids were between seven and 10 years old were thrilled, making it all the more gratifying for Stewart and everyone involved: “The look on their faces when they walked in that gymnasium yesterday… I don’t think anyone was aware of the extent. I think reality actually hit when they walked in.”

She said that they needed approval from the students’ families before handing out the bikes to them.

“Obviously, dealing with some families that are lower-income, it’s a tricky situation,” Stewart said. “Some people don’t want to be given a hand-out, so we were trying to approach it as a hand-up for everybody.”

She tried to host the event before Christmas but it didn’t happen due to conflicting schedules.

“We kept plugging through and my partners at Comox Bike Co. worked tirelessly and volunteered their hours to build all the bikes for us and get those all ready, and they donated a bunch of swag, water bottles, and water bottle cages,” Stewart said.

Pink Bike threw in t-shirts and stickers, and Gravity MTB donated coaching for all the kids.

“It was a big day of everybody getting stoked on mountain biking,” Stewart said.

The 36-year-old had a battle with cancer five years ago and can no longer have children, so she works with kids by coaching them with Gravity MTB, and runs after-school programs with Cumberland Recreation.

“I love being around kids, love helping kids, so that’s the capacity that I’m able to get involved with them,” Stewart said.

Stewart grew up in a low-income household and didn’t have a bike growing up.

She said the first time on a real mountain bike wasn’t until she went through her battle with cancer.

It’s also why she’s hoping to start a not-for-profit.

“I want to be able to get as many people, kids and adults alike, on bikes and help them build the confidence that they need to be able to grow and progress in their life in a positive avenue,” Stewart said.