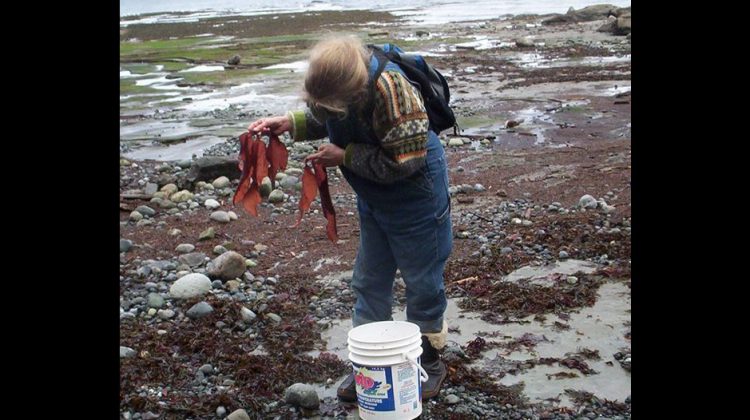 Hornby Island has its very own seaweed lady.

After recent hip surgery, Vera Rønningen is teaching islanders about the plants.

She plans to do a two-day workshop during the Family Day weekend.

“We have some really nice species coming up then, that we won’t get in March.”

During the classes, she’ll be talking all things seaweed.

“I introduce them to what’s edible, what’s medicinal, what’s toxic, potentially, not to eat kind of thing, and then I teach them about their life history cycles and when and when not to harvest. That’s the most important (thing).”

She points to Porphyra, a seaweed that grows in cold, shallow seawater, which only appears for a few days.

“The rest of its life, it lives microscopically in shells,” Rønningen said. “But you think, oh, there’s so much of it. And you go pull and then the next one’s pulled and then there’s nothing left to reproduce. So that’s the main goal is teaching them not what to eat and teaching them not to wipe them out.”

For Rønningen, who said she eats seaweeds “pretty near every day,” they are not only edible, but beneficial on every level of physical health.

“I’ve got my masters in marine ecology and I specialized in seaweeds and I tell you, when I studied seaweeds what kept going through my mind is, ‘How can we be healthy at all without eating them?’” she said. “I love it. It’s my main vegetable.”

Rønningen said that seaweeds carry the identical mineral ratio to the ocean water, because they get their nutrients directly from the ocean.

“And our blood, when it’s healthy, has a mineral ratio identical to the ocean so it’s the most nutritious food we can eat, and our land is really, really lacking in minerals,” she added.

However, it’s important to know what you’re eating. Rønningen describes them as the “mushrooms of the ocean.”

“There are certain seaweeds now because of Fukushima and all the radiation and stuff, that I’m a little concerned about eating, and there’s also certain seaweeds (that) you have to make sure where they’re growing.”

Rønningen said the upcoming class is so popular, she has had to extend it to two days.

“When I started doing seaweed workshops, it was like pulling hens’ teeth to get people aware of seaweeds,” she said.

But then her hip got so bad, she had to take a break.

After getting a new hip last April, she’s up and moving and ready to pass on her knowledge of these weeds in the sea.

“Now I’m able to do it again and all of the sudden everyone now (is) enthused about seaweed,” Rønningen said.

She used to do three-day workshops “so that I was sure I didn’t give them too little information which can be dangerous.”

“You can wipe out a species if you don’t know what you’re doing harvesting,” she said. “So that’s a big part of it.”

Rønningen is also looking at hosting an intensive workshop for “off-islanders” (those who don’t live on Hornby Island) in March.