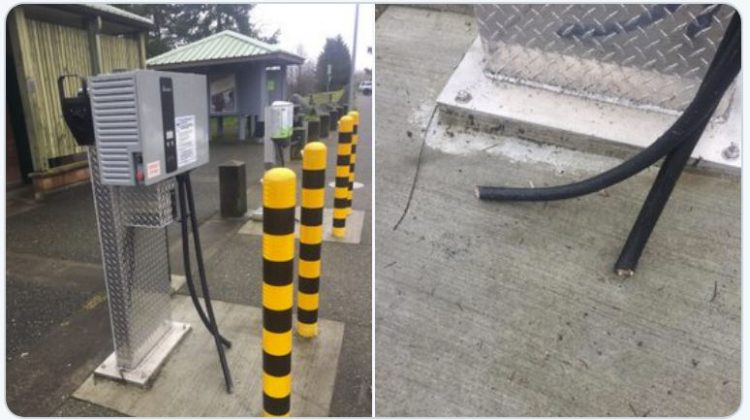 It will be some time before all of the electric vehicle charging stations at the Buckley Bay rest stop are up and running.

This, after someone sliced their cables.

The Ministry of Transportation and Infrastructure estimates the repair cost to be roughly $12,000.

Some machines were repaired as the MOTI had the replacement cables available; however, a couple of cables are expected to arrive in two to four weeks.

The Ministry says this was an isolated incident.

“It’s actually a great spot for people on the highway that have electric cars to stop,” Arbour said.

He said this isn’t the first time this has happened, since the province installed them about a year ago.

“The technician told me it may not actually be the first time that it was vandalized. It’s very sad to see.”

Arbour said there are two theories behind the vandalism.

One is that the vandals were after the copper at the ends of the cables, but “talking with the technician, it sounds like the copper value is probably 20 or 30 bucks.”

“So it’s hard to fathom somebody cutting the power supply to everything and going through all this trouble, just for that.”

He said the second theory is someone showing their frustration over electric cars.

“Everybody knows there’s a station there, but it’s going to take two-to-four weeks to repair it, and I’m sure a lot of people will show up with (their) electric car, with the battery partly exhausted, and they’ll come there and find the station on the blink, so that’s the parts that really saddens me the most.”

There are security cameras at the Buckley Bay rest area, however electricity was cut to the site before the vandalism took place.

The ministry will be adding vandal-proof power boxes at the rest area and a separate power source for the surveillance camera.

The CVRD is investing in more charging stations across the valley, Arbour said: “It’s nice to see partnerships between the province, regional district, local governments to improve the charging infrastructure. I don’t want the public to think that we’re going to throw our hands up in the air. We’re actually going to invest more in that direction in the years to come.”