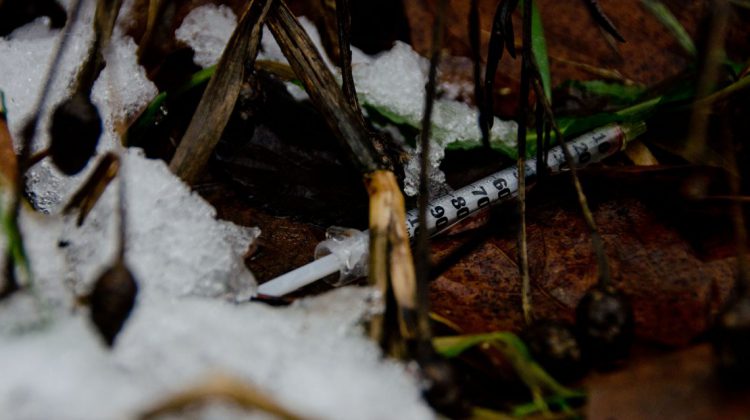 A needle lies in underbrush near the City of Courtenay municipal works yard along Rotary Trail. (Taken by James Wood, MyComoxValleyNow.com Staff)

A plan is in the works to replace disposable needles with retractable ones.

Courtenay Mayor Bob Wells told the MyComoxValleyNow.com newsroom that the idea came from a conversation he had with Courtenay’s fire chief.

“The Courtenay fire chief and I were meeting with the rural coordination center for BC Health and during the conversation, the fire chief brought up the fact that in the Naloxone kits that they carry they have retractable needles so that they reduce the probability that someone can injure themselves inadvertently,” explains Wells.

Mayor Wells says the question was raised as to why the needles are not the same ones being given away at a needle exchange or overdose prevention site.

“That question was bantered about and there were a lot of medical professionals at that meeting and it kind of created a big question mark.”

He says he then reached out to Aids Vancouver Island to ask them if it was possible to introduce the retractable needles.

“After that meeting, I did contact Aids Vancouver Island here in Courtenay and had that conversation with them to see, ‘are those needles supplied to them, do they purchase them, are retractable needles an option?’ and during the course of the conversation it looked like that might actually be a possibility.”

“So they’re looking into it to see if they could do a trial run of those and see if they’re able to get them, if there’s a price difference and then really the most important thing; is there that ethically of reducing injury,” says Wells.

Mayor Wells says although it’s still very early in the process, if it’s successful, the plan is to take it to a large scale.

“I brought it up at council and it’s my intention to bring this forward not just for the Comox Valley but regionally and provincially and possibly federally to say if this is an option, this should be the only choice that we give ourselves.”

“Once we have a proof of concept and then we know that it is possible and we can see what the differences are then I think it should be something we look at taking at a much bigger scale,” added Wells.

We have reached out to Aids Vancouver Island for a comment on the progress of the pilot and at the time of publication, have not heard back.