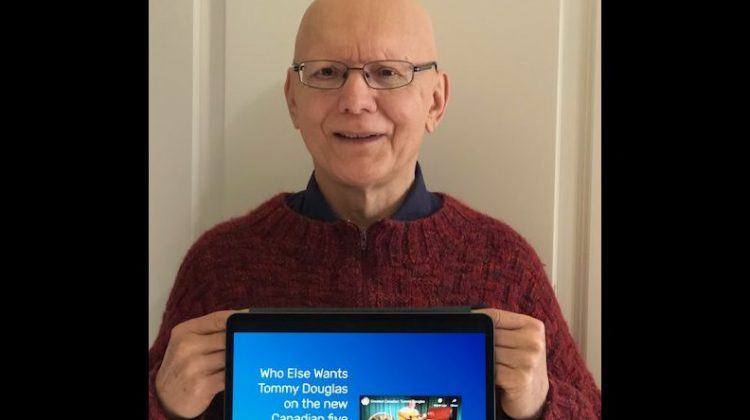 Ron Woznow is helping to spearhead a campaign to have the late Tommy Douglas's image on a five dollar bill. (Supplied by Ron Woznow)

Two ex-prairie boys believe that the late Tommy Douglas should be the next bank ‘note-able’ Canadian.

To honour Douglas, Powell River residents Ron Woznow and Robin Murray are spearheading a campaign to have his image on our five dollar bill.

“It became obvious to me when I started thinking of all the Canadian politicians who have left something for all Canadians, Tommy Douglas just sprung to mind,” Woznow said. “It’s just this huge freedom to know that if you need medical assistance to save your life or your daughter’s life or whoever, you’ll be able to get it and afford it.”

The most significant innovation during Douglas’s time as premier of Saskatchewan was the implementation of government-funded health insurance.

“In 1962 Medicare was started in Saskatchewan and then by the federal government in 1966,” Murray said.

“Douglas has been an inspiration for many Canadians from sea to sea for his social activism. He was defined by his belief that his job as a politician was to help create a better society for all. Tommy Douglas is the historic Canadian who should appear on the new five dollar bill.”

“Rob and I were talking a couple months ago about what Canadian politicians have made a difference in our lives,” he said. “I just heard from a friend in the U.S. that was really faced with a crisis because of the cost of healthcare down there.”

Woznow said he realized that the fundamental difference between Canada and our neighbours to the south is, if you are having a major medical issue in the U.S. “you often have to decide whether you want to live or whether you want to sell your house and live.”

In Canada, he said, you don’t have those kinds of traumatic decisions to make.

Woznow said they are reaching out to prominent Canadians across every political spectrum, and getting a very positive response.

In 2004, Douglas was voted ‘Greatest Canadian’ in a CBC contest.

Woznow says he knows why: “You think of all the people who have been touched by the fact that they can get medical care when they need it.”

The deadline to submit your nomination in the Bank of Canada’s public consultation is March 11.