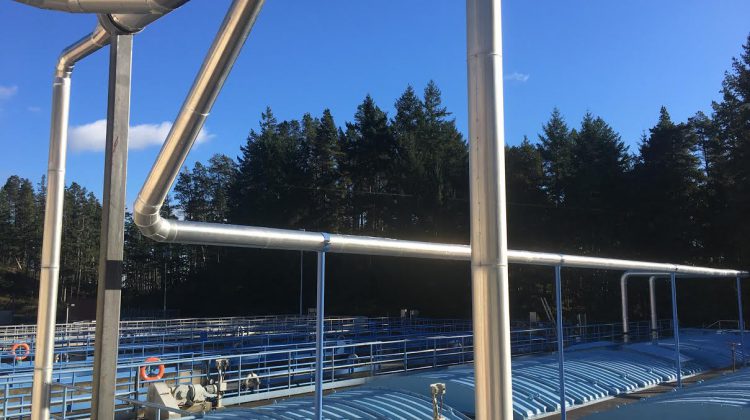 Photo shows covers on primary clarifiers which were installed in 2018 as part of $2 million in upgrades to the Comox Valley Water Pollution Control Centre. (Supplied by the CVRD)

Odour upgrades are in the works for the Comox Valley Water Pollution Control Centre.

The Comox Valley Sewage Commission gave the green light for $7 million worth of upgrades at the plant, which treats sewage from the City of Courtenay, Town of Comox and CFB Comox.

This comes following study work, analysis and consultation with the community.

Upgrades include covering of bioreactors and treatment of the additional foul air through a new, larger wet chemical scrubber.

Dispersion modelling shows these measures will bring odours down to a minimally detectable level for residents living near the treatment plant.

“I would like to thank our neighbours for their patience while we arrived at this decision. Balancing the demands on our services is not easy and it was important to take the time to conduct a fulsome study and analysis before making such a significant investment,” said sewage commission chair, David Frisch.

“We are confident this is the right decision, both for the sewage service and for the neighbours whose quality of life has been negatively impacted by the treatment plant.”

Construction is expected to be complete by summer 2021.

The commission also directed staff to consider implementing interim measures to minimize smells while the system is under construction.

Along with the upgrades, a two-tier odour standard will be implemented that is in line with other jurisdictions in the province including the Capital Regional District and Metro Vancouver.

An upper “design” limit will be set at five Odour Units at the treatment plant property line, with a decision to be made on a lower “operational” limit once upgrades are in place and follow-up odour sampling and dispersion modelling is complete.

A legal settlement in the 1990s led to the implementation of $7 million in improvements at the sewage treatment plant, including covering of odorous tanks, a new wet chemical scrubber and the removal of biosolids to the landfill.

However, some odours continued to persist and in 2013 the Sewage Commission directed staff to undertake further study work and recommend additional mitigation measures.

In 2018, $2 million was invested to cover the primary clarifier and install an activated carbon polisher at the plant.

Following continued complaints from the neighbours, additional modelling and analysis was completed in 2019 which resulted in the decision.

For more information about the sewage treatment plant and these upgrades visit: www.comoxvalleyrd.ca/upgrades