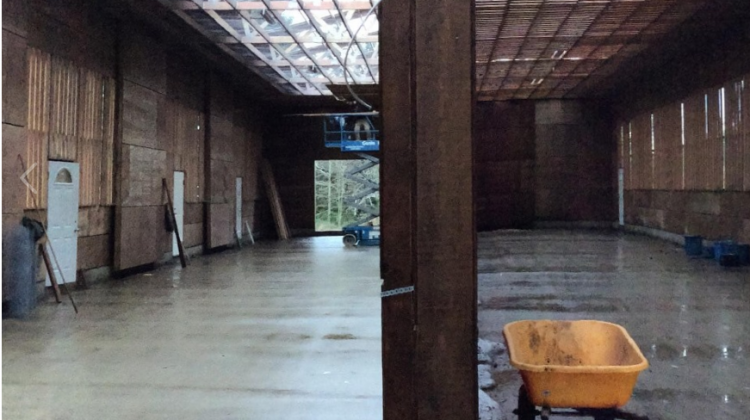 The 120 by 40 foot eagle enclosure is expected to open in about a month. (Provided by MARS Wildlife Rescue Center, Facebook)

The MARS Wildlife Rescue Center is getting closer to finishing its new eagle rehabilitation enclosure.

MARS President Warren Warttig says it’s only about one month away from being finished.

“We’re almost done, were just doing the fine-tuning. We have to put some pea gravel six inched deep on the inside so it cushions the birds landing and a little bit of perimeter stuff. We’re literally just a month away from opening it up.”

He added that once the new building is completed the organization won’t have to ship eagles elsewhere to get the help they need.

“Since MARS has been operational every time we get an eagle we have to send it to another facility to get it conditioned before we let it go and that causes a chance of injury and it stresses out the bird. Once we get this open it just gives the eagles a much better chance of surviving in the wild,” says Warttig.

The 120 by 40-foot structure has been built with help from the Village of Cumberland, the Cumberland Rotary, Ready Mix and many volunteers.

Warttig says that help has been a major part of why the enclosure is getting built.

“It’s been about three years, we got some incredible donations from Cumberland, Ready Mix and the Cumberland Rotary to pour 99 percent of all of the concrete needed. That was a massive project because its 120 foot long by 40 feet wide, so its not a small structure and it wasn’t a small amount of concrete that was needed.

Warttig says the center is also trying to help and eagles that come into the shelter with lead poisoning.

To do that he says the center needs donations.

“This is a tough time of year because donations drop off and we’ve got a funding campaign for eagles with lead poisoning and that’s our number one cost and number one animal that is draining the bank account. We could certainly use some help on that.”

To learn more about the MARS Wildlife Rescue Center or to donate, visit its website.