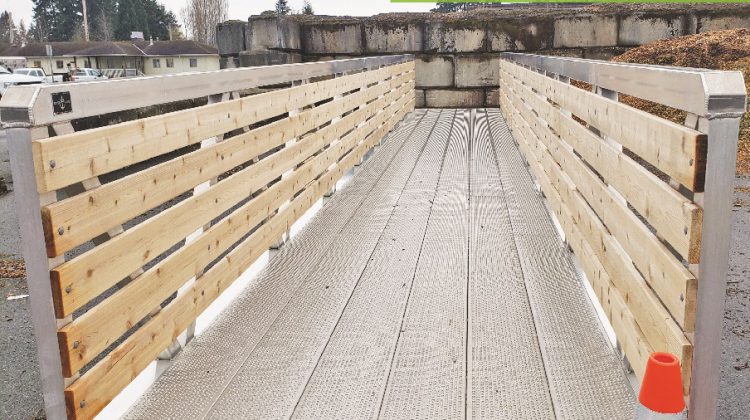 The City of Courtenay is replacing the pedestrian bridge leading into Puntledge Park.

An assessment of the old bridge showed that it was nearing the end of its life.

It will be replaced with a 40-foot long aluminum and wood structure, similar to other pedestrian and cyclist river crossings in other parks around the city.

Manager of Parks Mike Kearns says the city chose to replace the bridge instead of upgrading the old one because it would be more affordable.

“We did investigate upgrading the existing structure, however, the cost was prohibitive, so we moved toward an outright replacement. The new bridge will have a level crossing that will be a little easier to use for those using strollers mobility aids such as wheelchairs, and will also meet current safety standards. It will serve our community for many years to come,” says Kearns.

Installation of the new crossing will start this Friday at 7:00am with work expected to be complete by 4:00pm.

The main entrance to Puntledge Park off 1st Street will be closed. Park users will be detoured to the entrance on 1st Street at Woods Avenue, or the entrance off Willemar Avenue and Robert Lang Drive.

For more information, call the city’s public works department at 250-338-1525 or email publicworks@courtenay.ca.

BCHL moves ahead with exhibition games, season delayed to December