Herring moratorium supporters come out in droves for protest 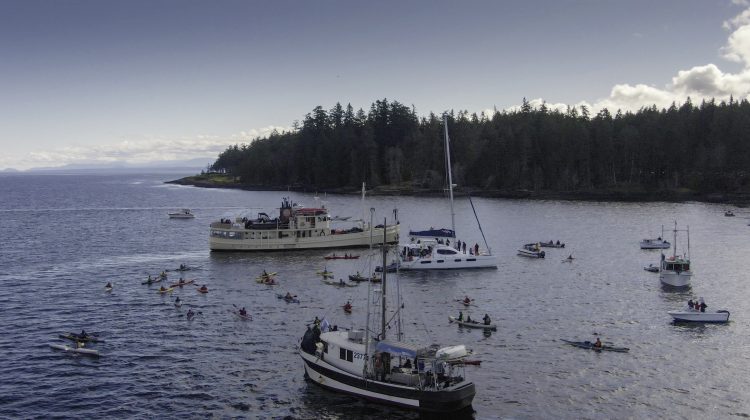 A flotilla protest against the Salish Sea herring fishery was held on Sunday. (Supplied by Rebecca Benjamin-Carey)

One of the organizers of a flotilla protest against the Salish Sea herring fishery is calling it a success.

“The boat launch ramp at Denman was thick with people, as was the upper portion of the dock of Ford’s Cove on Hornby. And then, of course, so many boats came out. There would have been at least 30 to 50 kayaks and probably 20 to 30 larger craft including the Pacific Yellowfin which is over 100 feet long, and several trawlers, (a) catamaran, couple of sailboats, multiple powerboats and lots of people with signs, banners, and flags. It was a great day.”

He added that Lambert Channel was “filled with boats, which is great.”

The herring population has dwindled to just over 54,000 tonnes this year.

The groups are calling on a moratorium to allow the stocks to recover.

MacLean says the Department of Fisheries and Oceans needs to listen to the message that things need to change before it’s too late.

“We know this fishery is crashing,” he said. “It’s collapsing, the herring are being driven to extinction just like the cod were on the east coast and DFO is not managing this fishery correctly. They know that; they know they’re not following their own science. Unfortunately, they’re driven by industry capture and lobbied by the fishing industry and that needs to change.”

MacLean said Conservancy Hornby Island was on the water on March 6th, the day the fishery opened and saw that the seiners “got their quota very fast.”

“They were off Denman Island, and they were able to pick up their quota in a matter of hours,” he said. “The fishery actually closed 24 hours later, the following morning.”

However, he said the gillnet component is having a tough time reaching their quota.

MacLean called that concerning: “The herring (stocks) that we’ve been seeing this year are small. They’re first year, second year, third year herring. These are herring that aren’t of the size and age to really create abundance and to be able to regenerate on the beaches here.”

He added that the spawn this year is not as plentiful or widespread as the ones in the past.

MacLean said they all had the same message: “A moratorium needs to be put in place so that the Salish Sea in itself, doesn’t become a broken ecosystem.”

Those in favour of suspending the fishery point out that the falling demand and lower prices for herring roe on the international markets, and the role herring plays for an array of species of marine life and sea birds that rely on them as their main food source, such as chinook salmon and Southern resident orcas.

In early February, the Department of Fisheries and Oceans Canada said, in part,  that it’s committed to “effectively managing the Pacific herring fisheries through evidence-based decisions, ensuring the health and sustainability of these stocks into the future.”

It added that the 2020 Pacific Herring Integrated Fisheries Management Plan (IFMP) has been approved following a 30-day consultation period with First Nations communities and organizations and with stakeholders such as commercial harvesters.