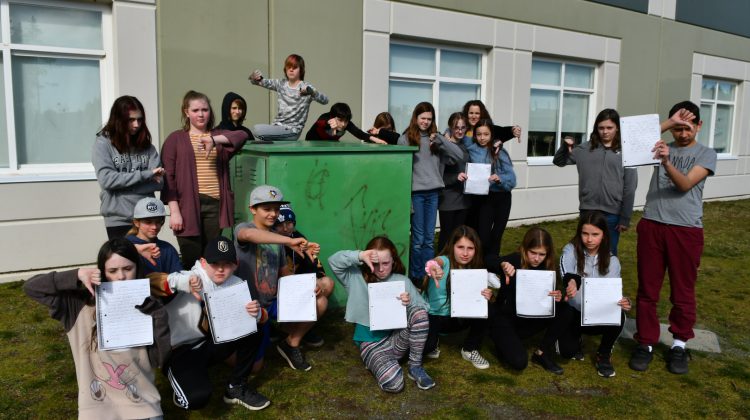 Students gather around the back of Queneesh Elementary displaying disappointment with the recent graffiti hit on their school, many of whom penned their emotions and concerns in personal letters to reflect on the incident and the reasons why it may have occurred.(Photo provided by Mary Lee, Comox Valley Schools)

Queneesh Elementary School students have taken a different approach to responding to vandalism.

Sometime Saturday night the school was damaged with spray-paint.

School District 71 says parents, neighbours and members of the Living Hope Church who meet in the school gym for Sunday service, came forward with offers to help clean and cover up the mess.

School principal Christine VanderRee  says the whole exterior of the school was damaged.

“I think the degree of graffiti was pretty shocking. All four sides of our building were covered, it was clear they just went from one side of the building working their way around as if they were writing. Some of them made no sense at all, just scribbles and marks.”

She says the most confusing thing about the graffiti, was that it didn’t seem to be directed at the school at all.

“The part that had students and myself wondering about was the messages of ‘I’m sorry, I was mad’. There were no anti-school messages, no anger at staff which I would sometimes expect to see,” says VanderRee.

“It was just somebody was mad at something and they took it out on the school building and I think by the time they worked their way around the school they thought ‘Oh I made a big mess and I feel bad about it.’”

VanderRee says the reaction from students ranged from worry to confusion.

“It was an interesting twist right from our little guys, the kindergarteners were worried. They only saw it as ‘are we safe?’ ‘Has something been done to the inside of our school?’, ‘Is everybody safe?’ and that was hard to see and to hear.”

“As you got older in the grades there was lots of questioning of why. ‘Why did they do this’, ‘what made them want to do it? Some of our older kids started to see some of the messages and were super confused.”

Some students wrote letters to share their feelings including Sonja who wrote, “Art. Our world wouldn’t be the same without it. It gives us the opportunity to express ourselves but, when people do it illegally, it’s different.”

Another said, “It made me feel angry because instead of maybe getting new computers we have to pay for paint.”

VanderRee says it’s encouraging to see students care so much about the school.

“I’m very proud of our kids that they would have that level of empathy come out of it. (I’m) delighted in the pride they have in our building that they were offended by the damage that was done to them, and it leaves me really hopeful for their futures that they can see this as a learning experience for their own actions as they get older.”

Some of the students also want to turn a lightbox that was damaged into an art piece.

“A group of students are now putting some proposals of how they can turn that into a piece of art for us because that didn’t get fully covered over.”

“We may reach out to Jason Craft who helped us with our school mural in the front entrance and see if we can help our kids transform the last of the ugly into something beautiful for our building,” added VanderRee.

If you have any information about the incident that happened overnight on Saturday, call the  Comox Valley RCMP at 250 338-1321.