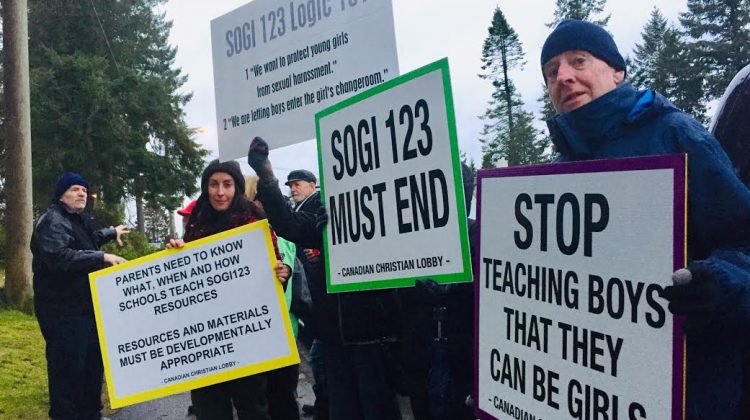 The Campbell River School Board chair is speaking out about the anti-SOGI 123 protest.

In an open letter on the school district website, board chair Richard Franklin said they were aware of Canadian Christian Lobby’s planned protest against SOGI 123, as well as the counter-protest.

Franklin said board members “were hopeful that all parties would remain respectful.”

He said the board had to take the “unusual measure” of closing the public gallery and asking all attendees to leave after the meeting was interrupted within the first five minutes by Canadian Christian Lobby founder Christian McCay and some anti-SOGI protesters.

McCay claimed their goal was not to interrupt the meeting.

“When the counter-protest came in the midst of us and started a quarrel we thought we’d better go where there is a better-controlled environment,” he said. “So we went inside, just to be quiet and observe and hopefully stick around until the end because there was a grandfather that wanted to speak out.”

Franklin said at the opening of the meeting, he had asked those in the gallery to be respectful and not interrupt as the board was conducting its business.

“As I was attempting to make my opening remarks Christian McCay interrupted, trying to change the proceedings and structure of the meeting. He was asked to be quiet three times and three times he was ruled out of order for refusing to comply with an order of the chairperson,” Franklin said.

“This refusal to comply left the board with no other choice but to close the public gallery and ask all attendees to leave.”

McCay said SD72 wants to make him out to be the problem.

“I want to show that SD72 is not demonstrating transparency as they say they are,” he said. “I want to demonstrate the truth about the many parents that are upset about SOGI 123. The resources that are not developmentally appropriate are not acceptable.”

In the letter, Franklin said public board meetings are not public meetings.

“They are meetings where the board conducts board business with an invitation to the public to observe the proceedings and for members of the public to ask questions of the board in relevance to agenda items for that meeting at the designated question period,” he added.

Franklin said the “Canadian Christian Lobby, its founder Christian McCay and its supporters claim the board has not been willing to hear their concerns and that is simply not the case.”

“We are always open to hearing the legitimate concerns of parents of children who attend School District 72 schools, but parents must bring forward their own concerns,” Franklin said.

“Outside of concerns from the Canadian Christian Lobby and its founder Christian McCay, there have been no concerns brought to the Board of Education from parents whose children attend SD72 schools since the resources were approved by board motion in May 2018.”

Later in the letter, Franklin said, School District 72 and the Board of Education remain committed to ensuring that schools are inclusive and reflective of all members of society and that all students feel safe, welcome and positively reflected in their schools.

“We also continue to be open to hearing the concerns of the students and families who attend our schools and have many avenues for parents to share those concerns, always encouraging them to speak first with their child’s classroom teacher and school principal,” Franklin said.