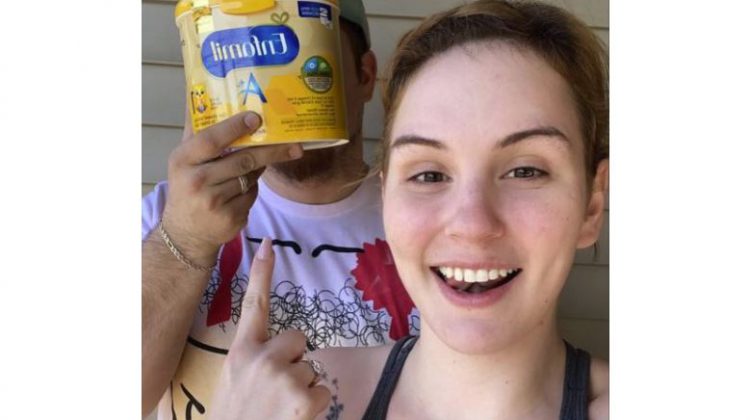 Sabrina Duns points to one of the cans of formula that she donated. In total, she dropped off six cans to families in Campbell River. (Supplied by Sabrina Duns)

Campbell River families have more formula to feed their babies, thanks to the generosity of a local couple.


Sabrina Duns reached out on Facebook, saying that they bulk ordered the formula for their daughter but she no longer needs it.

“We had ordered it about a month ago and my daughter stopped taking it so she went on milk,” Duns said. “I had noticed people were kind of in a frenzy looking for formula and I had it sitting here so I decided to donate it.”

On Thursday night, Duns donated one can each to six different families in the city.

With the importance of social distancing, she dropped them off at their front doorsteps.

Duns said it’s been hard to find most things right now amid the COVID-19 pandemic.

“I figured if I have it, I might as well give it to babies in need,” she said.

She said the crisis we’re in has been especially tough for young families, which was a big reason behind her humanitarian efforts.

“I wanted to do my part to help but I also have two young kids and I know that it can be hard to not feel depressed when you feel like you can’t really do enough for your kids,” she said. “I just wanted to be able to help other parents.”

Duns chose the families mostly on recommendations from people who said that they really needed it.

In one instance, she had to make a very tough decision: “I ended up choosing between a preemie and an older baby. I thought that the preemie might need it a little more. It hurt my heart to have to choose between two kids.”

This isn’t the first time the family has helped others.

During the Christmas season, Duns and her partner Kevin Collins buy gift cards, which their son hands out to people at grocery stores.

As well, during Thanksgiving and Christmas, they buy two families turkey dinners.