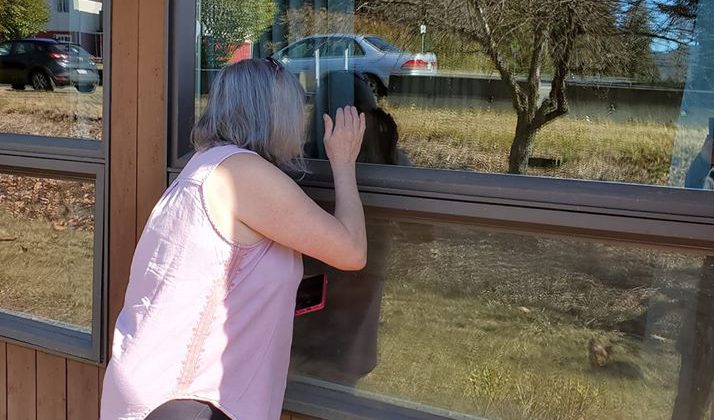 Debbie MacLean and her family aren’t letting COVID-19 stop them from visiting her dad.

Her 89-year old father Earl Naswell currently lives at the Cumberland Seniors Home and because of the pandemic, isn’t allowed visitors.

Debbie says that’s a hard thing for her dad to deal with.

“He’s a very sociable person and if you get to know his name, he’s actually the one who started the Christmas dinner at the Filberg many years ago…so he’s very well known in Courtenay and very well-loved.”

“He’s a very sociable person so this is taking a toll on him,” explains MacLean.

She says instead of not visiting her dad -which they normally do almost every day- the family came up with a safe and creative way to talk with him.

“He has a cell phone too so we just brought our chairs and sat outside his window and phoned him. He had us on speaker cause he is hard of hearing and it was nice. He was really happy to see us.”

MacLean says although the visit was a little unconventional, it was better than not seeing him.

“It was kinda hard leaving because you couldn’t give him a hug, but it was also nice to see his face because we haven’t seen his face for a week, so it was really nice to see that.”

She added that her dad doesn’t really understand just how serious the COVID-19 situation is.

“It’s scary, and he’s said you know ‘you guys can come in’ and I don’t think he’s grasping the severity of it. I’ve said ‘no dad this is for you. You’re in the best place right now, you’re safe this is where you need to be.’”

She says as long as the weather stays nice, the family plans to take their chairs and phones to visit him as much as possible.