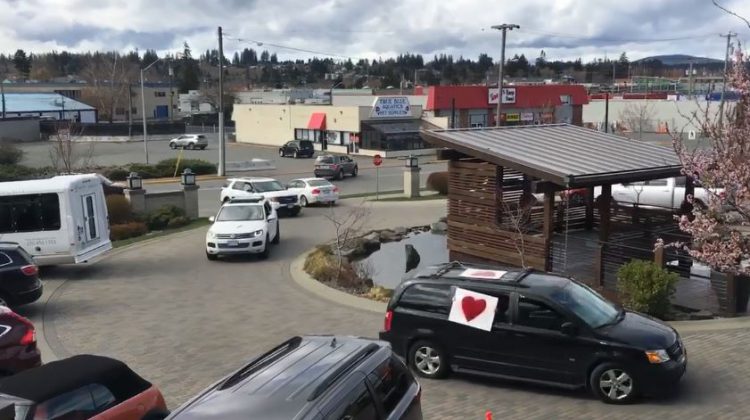 Screen capture of vehicle parade at the Berwick by the Sea retirement home on Sunday. (Marion Eberlein, Facebook)

Residents and staff at Campbell River’s Berwick by the Sea have a reason to smile today.

They were treated to a vehicle parade on Sunday.

This comes after a resident of the retirement home had tested positive for COVID-19.

Jeune said she put the parade together to show support, because it’s been a difficult time for the residents. “They all just had the norovirus come through not that long ago and so they were all on quarantine, my mother included, (she) actually came down with it, and then we got hit with the COVID(-19), so they’ve been isolated, and lonely, and feeling like they’ve been left out for an awfully long time now, and I just felt like we just needed to show them that we are all here for them.”

A heartfelt thank you from all of us ❤️Campbell River You Rock !💥 ❤️🌈

When Jeune floated the idea on Facebook, she figured she’d see about 10 vehicles.

She was pleasantly surprised by the estimated 40 vehicles that took part. Many of the drivers honked their horns as they circled past the building.

It was an emotional experience, Jeune said.

“Most of us were teary-eyed trying to drive at the same time. It was a wonderful feeling. There were so many people standing out on their decks, waving back. We could see through the windows and on the decks, people crying and waving, and clapping and just being grateful.”

Meanwhile, Island Health has confirmed that those who came close to the individual have been notified and all necessary steps are being taken.