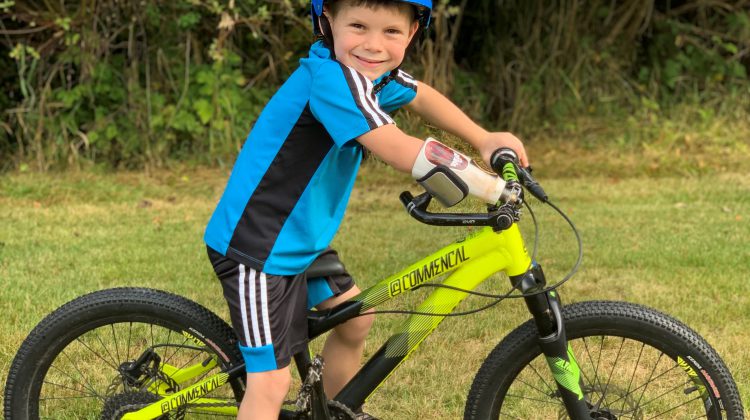 With April marking Limb Loss Awareness Month, amputees like Nathan Seline, 6, of Cumberland, demonstrate that an amputation is not a barrier to living a full and active life. (Supplied by The War Amps)

The six-year-old Cumberland boy takes part in his favourite activities with the help of artificial limbs and adaptive devices.

His mom, Jacky, said Nate has a simple philosophy: “He basically just tells people, that was the way he was born and he can do everything that they can do. There’s nothing that stops him from keeping up with his friends.”

“Right after he was born we called (The) War Amps, and at three months old he attended his first seminar,” Jacky said.

She said the seminars are amazing: “They’re really emotional. It’s a three-day weekend, Friday to Sunday, and they happen every year in March. They really help kids deal with issues like teasing and bullying and other topics such as parenting a child amputee. The seminars… they have a really life-changing effect on the CHAMPS and even the parents as they meet other kids like themselves.”

Jacky said her son has made many friends at the seminars and was devastated that it was cancelled this year because of the pandemic.

As a member of the CHAMP Program, Nate is eligible for financial assistance for the cost of artificial limbs and adaptive devices.

Jacky says The War Amps has allowed her son to enjoy activities that he would otherwise have difficulty with: “Nathan was fitted with a bike device that allows him to hold onto the handlebar and helps him steer.”

Although The War Amps has provided more than 100 years of programs, there is still much to do to ensure amputees across Canada can have the artificial limbs or devices they need, according to the program’s executive director, Danita Chisholm.

“The association receives no government grants, but with the public’s continued support, our vital programs for amputees will carry on long into the future,” Chisholm said.