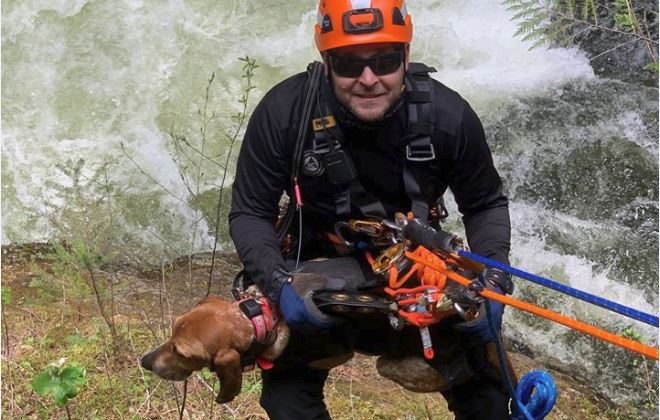 A hound is alive and healthy today, thanks to Comox Valley Ground Search and Rescue volunteers.

The K9 had been working with its pack, trailing a cougar when the big cat crossed the Browns River.

The dog tried to follow but was swept downstream and managed to scramble out onto a ledge.

The SAR Rope Team plucked it off a ledge near the edge of the river.

“Fortunately it was a very kind-hearted and calm dog,” Berry said. “The dog was certainly scared after its event but we were able to drive fairly close to the location, hike in about a kilometre to a site above the dog, and then our rope rescue team rigged a duel rope system and we had one person lowered over the side with a special harness for the dog. He was able to access the dog, get it into the harness, and bring it up pretty efficiently.”

It survived the ordeal without any injury, other than being a bit cold and wet.

Search manager Paul Berry said this was an unusual call because Comox Valley SAR’s main priority is to deal with people and not animals.

“However, there are times when we are asked to support the rescue of an animal because of the potential danger for people if they attempt the rescue,” Berry explained.

SAR was called just before noon yesterday to the area of Forbidden Plateau and Mount Washington.

The cougar jumped off a cliff into the river and swam across before climbing up a tree to escape from the dog.

The dog tried to follow but ended up getting swept downstream for at least a couple of hundred yards, and over a couple of waterfalls, and then got stranded on a ledge below a 30-metre cliff, Berry said.

While SAR member Brad Kilgour was the one who was lowered down to retrieve the dog, Berry said it was a significant team effort.

“He was the one who went over the cliff, but there is a team of about eight (people) above managing the systems and rigging the systems,” Berry said. “We had downstream containment in case the dog or Brad went into the water, that we could protect them.”

It took about three hours to complete the rescue.

Berry said he was happy with how it went. “We are certainly here to serve our community in this respect. That’s exactly what we did. People dropped what they are doing at home, (and) left work, to support this individual and to make sure his dog was able to survive to do its thing another day.”