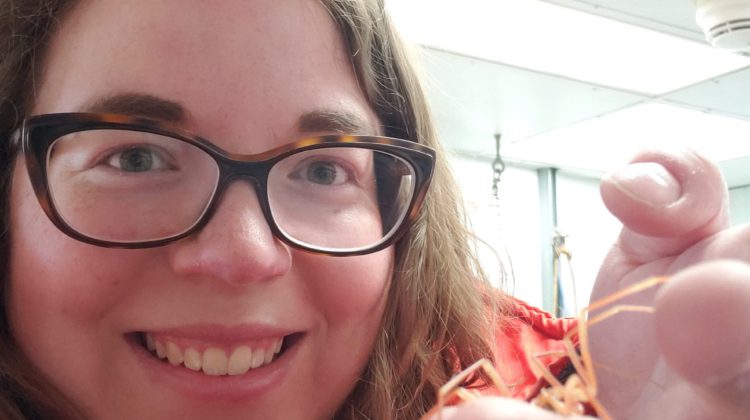 A North Island College instructor and marine researcher wants to inspire the next generation of marine biologists.

Dr. Emaline Montgomery is teaching biology at NIC this summer and is excited to share her passion for marine biology.

She says it’s a passion that developed while exploring the beaches of Vancouver Island.

“I was lucky to get to spend my summers exploring the beaches of Vancouver Island with my family,” Montgomery says. “Getting introduced to the weird and wonderful marine invertebrates of BC in this way inspired me to learn more about them, especially the sea stars.”

For two weeks last summer, Montgomery was aboard Canadian Coast Guard Ship Amundsen along with 25 other researchers, technicians and graduate students, collecting samples from up to 2.5 kilometres below the surface.

The expedition is part of a three-year scientific mission funded by the DFO to survey the North Atlantic Ocean floor between Frobisher Bay, Nunavut and Greenland.

The goal is to discover more about the unexplored biological and oceanographic features to build a case for a new marine protected area.

“It’s brand new,” Montgomery says. “These are regions that are incredibly deep and very cold and have lots of rich nutrients. And they’re also recognized for being an important habitat for soft sponges and corals, which provide reefs, kind of like the coral reefs in the tropics.”

She says they discovered dozens of specimens, including coral, sea cucumbers, and sea spiders.

“It’s very exciting. And even though they’re quite small, there’s a lot of beauty in these small creatures.”

The team spent the last year analyzing the specimens that were collected and several new species of sea cucumbers are currently being investigated.

Montgomery is now continuing research in B.C., looking at local sea cucumbers and exploring their use in multi-species aquaculture, along-side shellfish and finfish.

“There’s still so much to learn about the marine environment and the wide range of animals that live in the water. The more we learn, the better equipped we are to take steps to improve our relationship with the ocean before it’s too late,” Montgomery added.